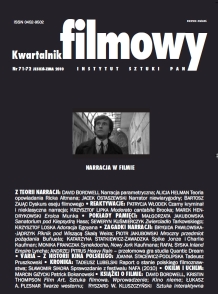 Summary/Abstract: The report was prepared by members of the Committee on Art Studies of the Polish Academy of Sciences. The authors present a short characteristic of Polish film studies, which, as elsewhere, became a popular university discipline in the 1970s. In Poland film studies developed as sub-specializations within departments of Polish philology and Cultural Studies. Only recently independent film institutes, departments and courses were created. The authors present the discipline as it appears in film studies monographs published in Poland, they also mention research institutes worthy of note, their representatives and the most important publications from the last five years. The report also deals with the question of popularizing knowledge, film studies journals and the desired directions for the development of the discipline.