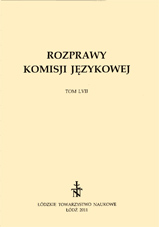 Summary/Abstract: The article deals with a description of phonetic structure of steppe subdialect of a certain settlement (Lozovatka village in Kryvyi Rih district of Dnipropetrovsk region). The author investigates the features of display and functioning of vowels and consonants in a dialect speech, and also pays attention to phonetic changes and processes determined by co-ordination of sounds in living dialect speech. The analysed phonetic phenomena, firstly, characterize the examined steppe subdialect as an integral language system, and secondly, are the continuation of general active tendencies in the phonetics of the Ukrainian language. These tendencies appeared and started to operate at the early stages of the language development. Subdialect speech fixing in the form of connected dialect texts enables to study and describe the subdialect phonetical building which, taking into account the connections between different language levels, helps to the objective understanding of essence of the analysed phonetic phenomena. The given analysis testifies that in a number of cases the examined language material allows not only to check, but also to specify our knowledge on the steppe subdialect, already known from the Atlas of Ukrainian language and correspondent dictionaries.