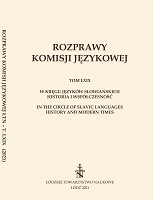 Summary/Abstract: The article presents an analysis of the peculiarities of the origin of the secondary form дрозки ‘rolling pin’ and highlights the specifics of the existence of variant forms of the noun in the Ukrainian language from the end of the 19th to the end of the 20th century. The analyzed word is a phonetic variant of the literary noun друзки , which is a loan translation of the Polish noun used in the construction rozbić w druzgi . The adaptation of the Polish phrase in Western Ukrainian dialects led to the emergence of the noun дрізки , which is a literary variant of the noun друзки . In the east, Ukrainian dialects mostly retain the form of друзки , which in the 17th century, as a result of analogy, changed to дрозки . The change took place in the Poltava region, from where a new phonetic form as a component of the construction of побити на дрозки extended into the adjacent territories. Sporadically written texts recorded the analyzed name before the early 1930s, but later the noun дрозки became obsolete in the Ukrainian language.