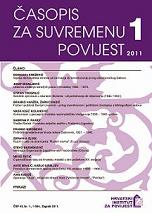 Summary/Abstract: The minority newspaper Ruski novini was the first official newspaper of the South Slav Rusyns in the Kingdom of Serbs, Croats, and Slovenes. The founder and owner of the newspaper Ruski novini was the Rusko narodno prosvjetno društvo (R.N.P.D.), founded in Novi Sad in 1919. Through a systematic review of all issues from 1924 to 1941, the author on the basis of relevant contributions to the newspaper attempts to show what the Rusyns wrote about themselves and what in terms of this then was their self-identifying perceptions and nomenclature (Identity I.) in the interwar era. In an effort to make the article as transparent as possible the textual analysis is accompanied by citations of the materials used which for the most part are translated, while a smaller portion is attached in its original form in order to more vividly respond to questions about research approach. Since the research results are based on materials from the first half of the 20th century, they must be treated exclusively in the context of historiography and scholarship. With reference to current self-indentifying perceptions of the Rusyns, this work has no particular merit since the conceptual limits of Identity I. analyzed in this article are set by the time and conditions in which the Rusyns lived more than eight decades ago when this newspaper was being published.