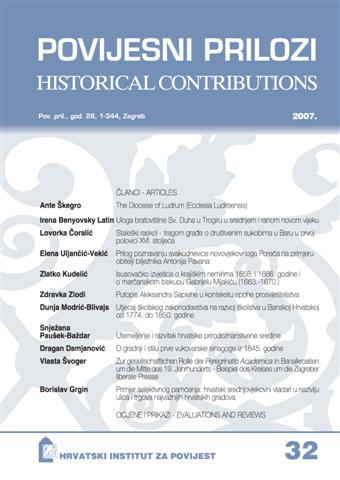 Summary/Abstract: The opus of Aleksander Sapieha (1773-1812) Polish nobleman, naturalist and one of the pioneers of Slavic studies and literature among Poles represents a valuable primary source for historiography, which reveals some up to now unknown aspects of relations between Croats and Poles at the end of the eighteenth and the beginning of the nineteenth century. His travel account Podróz w krajach słowiańskich odbywane contains many information about cities, towns and islands of the Eastern Adriatic coast, as well as about Dalmatian hinterland and Bosnia. His scientific interest was formed under the influence of Polish and other European cultural centers, which is visible from the text of his travel account. However, one has to admit that Sapieha regarding the research was an amateur. Even though, value of his notes and information from his travel account cannot be disputed. On the other hand, the uniqueness of his work is questionable, especially since he largely leaned on the study of his predecessor Italian abbot Alberto Fortis (1741-1803). It is often suggested that Sapieha’s voyage was politically motivated, though present state of the investigation cannot sustain such allegations. By the same token, the content of the travel account reveals that this journey was inspired by author’s great interest in history and culture of Slavic people, especially of those who inhabit Eastern Adriatic coast. Though Sapieha’s scientific interpretation can be disputed, it is unquestionable that his Voyage across the Slavic lands enriched not only Polish but also common European science in this field.