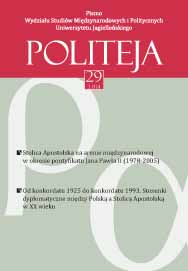 Summary/Abstract: John Paul II’s role in international politics and the political situation in the world at the time when Cardinal Karol Wojtyła assumed the position of the head of the Holy See. A preferential option for culture – this has to do with John Paul II’s statement about the primacy of culture and moral life (conscience) over the “means of physical power”. In his deliberations on this subject the Pope made frequent reference to personal experiences and the history of his nation. The silent triumph of human conscience – this part characterizes the communist system and its foundations: violence, falsehood and a life devoid of God. John Paul II’s reluctance toward violence which reluctance is supposed to be closely associated with his belief about the inherent power of truth. John Paul II claims that being faithful to the truth “disarmed the enemy because violence always has to resort to a justification by falsehood, it always has to assume false pretences of defending some right or of an answer to some danger”. Moral grammar – the international policy of persuasion – John Paul II was frequently referred to as “the pope of human dignity” or “the pope of human rights”. He recognized the fact that nowadays the truth about man is sufficiently well expressed in the Universal Declaration of Human Rights of the United Nations. However, what he had in mind was not merely a list of rights collected in one document, but he meant also that the universal moral right, inscribed into the heart of every man, is a sort of “grammar” which is necessary for the world. The knowledge of the “grammar” of natural law is the gateway to the policy of moral persuasion. Respecting human rights as the condition of true peace – John Paul II emphasized the fact that respecting human rights is not only the question of showing respect to human dignity, but it is also the fundamental question of maintaining just peace in the world. Therefore since the promulgation of the Universal Declaration of Human Rights of the United Nations the Catholic Church frequently emphasized the necessity of introducing certain additions to this important document. John Paul II’s words: Forgive, and you will be at peace! Despite his belief in the power of the truth and the final triumph of human conscience, the Blessed John Paul II was not a utopian. Despite his opposition to the “logic of violence”, he was not a pacifist. He was profoundly aware that a completely pacifistic society is an illusion and that brutal and systematic violence sometimes has to be opposed with military means.