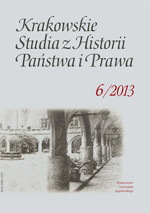 Summary/Abstract: The aim of this article is to refer Polybius’s political theory, included in Book VI of The Histories, to the history of the rise of the Roman Republic. This theme must have been particularly significant for Polybius. For him, Rome was the most perfect example of a mixed government system, and the aim of describing its history was to show the development of this perfect system. The article presents the mutual relation of theory and history, starting with the period of kingship, up to the emergence of the democratic element, i.e. the moment when Rome acquired the mixed system of government. Both the political and social contexts of the changes are outlined. The analysis suggests that Polybius related his political theory to the history of the state he admired, thus providing the theory with actual foundations. Reconstructing his analysis makes it possible to see the history of Rome in a different light, and to ponder the system itself and its decline, even though the main objective of both Polybius and this article is to present its development.