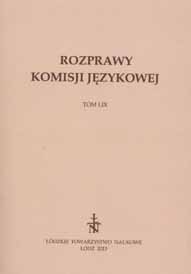 Summary/Abstract: The subject of this paper is to determine what are the sources that the CB radio users’ sociolect derives from. The analysis has shown that the main sources of the CB radio lexis are as follow: the informal language, the old dialect of chauffeurs, the automotive vocabulary and the other sociolects to some extent, such as contemporary youth slang (the old dialect of students and school children), the CB radio language, the language of criminal environment (prison slang and thieves’ argot), the hunters’ language, the military slang, the military language, the World War II partisan-conspiratorial language, the medical professiolect, the religious Polish language and the consumerist Polish language, the foreign language borrowings as well as the local folk cants and dialects but in a minor degree. The analysis has shown that the sociolectal lexis has considerably outnumbered the basic (common to all words) range of Polish vocabulary referring to transporting, commuting and travelling – 967 CB radio users’ expressions to 201 common words.