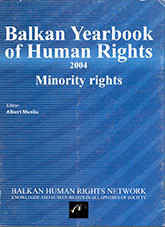 Summary/Abstract: "In the post-communist transitions in Central and Eastern Europe (CEE), few issues have been as contentious as minority relations in multiethnic states". Although nothing has done more to prove the validity of this statement than the dissolution of Yugoslavia, this paper will look at the complexity of minority relations at another East European state. Bulgaria's approach to the grand puzzle of democracy in a multiethnic state presents a case of interest for a number of reasons. For one, only five years since the end of the campaigns of its notorious minority rights violations, Bulgaria managed to produce an ethnic model that won the epithet "an island of stability peace in the region". However, while the international community and the political leaders of Bulgaria's largest minority spare no praise for Bulgaria's achievements, a closer look at the "island of stability" reveals that ethnic and religious minorities group continuously suffer discrimination and ill treatment.