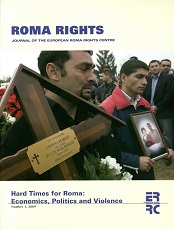 Summary/Abstract: AS the economic recession tightens its grip around Europe, human rights activists have warned that the crisis can fuel support for far right groups and radical political parties in Central and Eastern Europe.2 The recent murders of Roma in Hungary and the Czech Republic, the neo-Nazi marches in Bohemia and the success of far right political parties in Hungary are just a few examples that show that such concerns are well founded. Bulgaria’s track record of extensive discrimination towards Roma, its regular flirtations with populist and right wing parties and the continued decline of the economy at the time of the European Parliament and national elections gave reasons for concern that it could be the next case in point to prove the hypotheses.