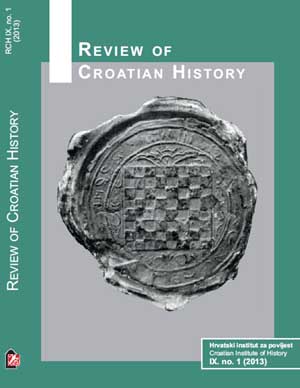 Summary/Abstract: This work contains an analysis of the results of a revision of the list of victims from Yugoslav territory held by the Mauthausen Memorial Centre. The revision was conducted by the Croatian Institute of History as a component of the project entitled “Human Losses of Croatia in the Second World War and Post-war Years”. After corrections and additions were made to the submitted records on individual victims, based partially on the revised Individual Name List of Victims of the Second World War and Post-war Period compiled as part of the work on the aforementioned project and to the list of victims of the Mauthausen Camp published in the relevant literature, the data so obtained were analyzed. The primary focus of the analysis was accorded to corrections to the victims list, such as names, surnames, places of birth and citizenship and nationality based on the state borders which emerged after the collapse of the Socialist Federal Republic of Yugoslavia.

CONTROVERSIES ABOUT THE CROATIAN VICTIMS AT BLEIBURG AND IN "DEATH MARCHES" CONTROVERSIES ABOUT THE CROATIAN VICTIMS AT BLEIBURG AND IN "DEATH MARCHES" 2006 Saveznička bombardiranja Slavonskog i Bosanskog Broda i okolnih mjesta tijekom Drugog svjetskog rata Anglo-American air strikes on Slavonski Brod and Bosanski Brod areas during the Second World War 2006 Izručenja i sudbine zarobljenika smještenih u savezničkim logorima u svibnju 1945. THE EXTRADITION AND FATE OF PRISONERS DETAINED IN ALLIED CAMPS IN MAY 1945 2009 Migracije srpskog stanovništva na području Nezavisne Države Hrvatske tijekom 1941. godine THE MIGRATION OF THE SERB POPULATION IN THE TERRITORY OF THE INDEPENDENT STATE OF CROATIA DURING 1941 2011 Mađari kao neprijatelji: rad Zemaljske komisije za utvrđivanje zločina okupatora i njihovih pomagača. Primjer: kotar Bjelovar HUNGARIANS AS ENEMIES: THE WORK OF THE HOMELAND COMMISSION IN ESTABLISHING THE CRIMES OF THE OCCUPYING POWERS AND THEIR COLLABORATORS. EXAMPLE: D.B. 2012
2022 © CEEOL. ALL Rights Reserved. Privacy Policy | Terms & Conditions of use
ICB - InterConsult Bulgaria ver.1.7.2509