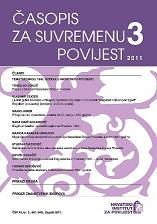 Migracije srpskog stanovništva na području Nezavisne Države Hrvatske tijekom 1941. godine
THE MIGRATION OF THE SERB POPULATION IN THE TERRITORY OF THE INDEPENDENT STATE OF CROATIA DURING 1941

Summary/Abstract: The Serbian population on the territory of the Independent State of Croatia (Nezavisna Država Hrvatska, NDH) was included in the Third Reich’s plans for the transfer of population. According to the initial plans, the majority of Slovenes were to be resettled within the territory of the NDH, from whose territory an equal number of Serbs was to move, but this plan could not be executed due to the lack of labour force in the occupied portion of Slovenia and the uprising in the territory of the NDH and Serbia. This method of solving the Serb question in the NDH was desirable to the government of the NDH, given the anti-Serb attitude of the Ustaša movement. The Salonika volunteers who were colonists in Slavonia, Srijem, and in the Bosnian-Hercegovinian areas during the period of the Kingdom of Serbs, Croats, and Slovenes/Yugoslavia were in the first ranks of the expected migrants, which in time was to include local Orthodox communities as well. Several versions of Serb migration was occurring concurrently: emigration from the territory of the NDH, the return of Salonika Front volunteers from the areas occupied by Hungary and Bulgaria, transmigration/evacuation within the territory of the NDH, expulsion as well as life in refugee camps. This article first and foremost examines emigration and expulsion and to a lesser degree population transfer/evacuation and refugee life during 1941. Because of continuous population movement across borders, especially the Drina river, whether due to expulsion, “voluntary” individual or mass movement which took place not only during the first two years of the war, it is difficult to state the exact numbers of Serbs who migrated, were expelled, or fled to Serbia.