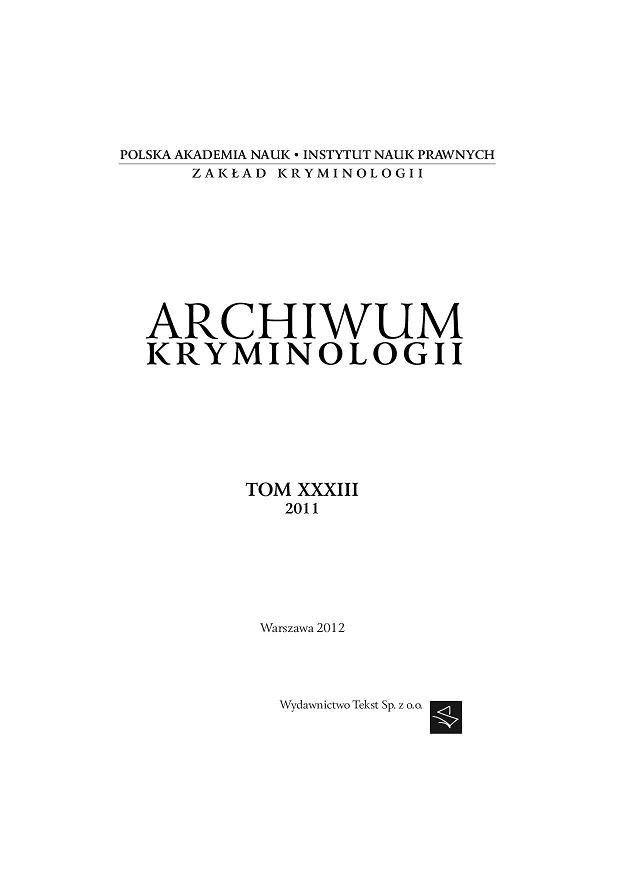 Summary/Abstract: History of criminal studies dates back to the 1930s. However, since 1990s it has been going through a revival. Presently, it is called developmental criminology or life-course criminology. The object of the study was to trace further criminal histories of under-age girls who committed a punishable offence in 2000. Between 2003 and 2005, files of 873 under-age girls were examined . In 2010 it has been 10 years since the studied girls had a court trial. The youngest ones were 23, the oldest ones 27 – and adult women are most frequently sentenced between the age of 23 and 27. The first stage of the study was to apply to National Criminal Registry for information if the perpetrators of criminal deeds committed in 2000 broke the law within the next 10 years as adults, if they were sentenced, if so – how many times, and for what types of crimes. The second stage was to analyse the data from the Registry according to a questionnaire. The third stage was to compare the results with the data obtained previously in the study of the under-age: the crimes which had been committed as well as social and family backgrounds. Data concerning education, profession and work history are hardly present in the Reg-istry. The only information available is profession. It is impossible to obtain information how many sentenced women actually worked as adults. 7 of them (6%) declared “unemployed” so we know they were unemployed but it is unknown if they actually had any profession. Un-doubtedly more than a half of the sentenced women (52%) had no profession. Those who had a profession were cooks (9%), shop assistants (6%) and dressmakers (5%. Three persons (2,7%) were technicians (graduated from technical colleges) of economy and administration, sales, and environment protection. Most women (61%) were sentenced only once, 19 of them twice (17%). Two “record holders” were convicted 11 times during the 10 years. In the adult life, just like previously, most offences are against property. 39% are deeds of exclusively such nature, 23% are offences against property related to other types of offences (e.g. against life and health, safety in transport, documents or related to drug possession and trafficking). In total In total, 62% of crimes were against property. Second noticeable category of crimes (which was not committed by under-age girls) were crimes against transport safety (13,5%). Crimes against health and life were 13% of the overall number. Definitely more adult women than under-age girls commit crimes against document credibility (8%). There are also more punishable deeds related to drug production, trafficking and possession (7%). The study confirms legitimacy of risk factors known for a long time.