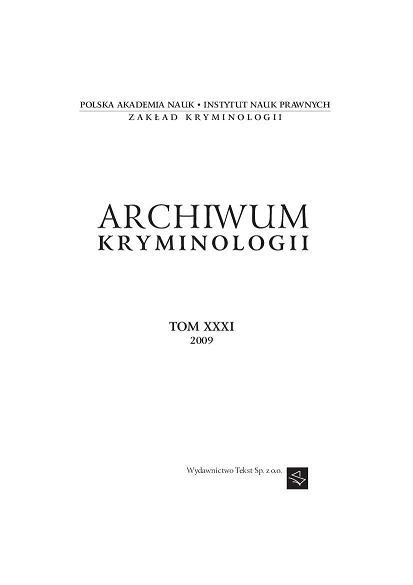 Summary/Abstract: The article concerns the phenomenon of stalking, or emotional persecution. It also presents legal solutions concerning stalking in the countries where this type of behavior is penalized, and includes a discussion of the advantages and disadvantages of criminalization of stalking in Poland. In contrast with the admiration, stalking is a behavior which a victim does not wish. Stalking is an English verb denoting a quiet human or animal tracking in order to capture or kill. In accordance to the definition of an American psychologist J. Reid Meloy, stalking is a form of malicious and repeated harassing and annoying of another person which increases his or her feeling of threat. Stalking, just like domestic violence, and mobbing are classified as so-called "emotional violence", by which we understand “interference in the psyche of another person directed against his or her emotions, resulting both immediate and delayed negative effects”. Emotional violence is never a single event. Stalking most often exhibits in such behaviors as: calls, silent calls, night calls, wandering in the vicinity of victim's home, making contact through a third party, questioning about the victim in his or her surroundings, persisting at the door / home / work, sending letters, e-mails, text messages, and gifts, placing postal orders in victim's name, tracking and following the victim, slander (distributing false information and rumors), burglary to victims house or car, stealing victim's belongings, harassing victim's family and friends, as well as attacking and assaulting them. The main problem with providing an adequate legal protection to a victim of a stalker lies in the fact that some of these behaviors are criminal, and some are not prohibited by law, nevertheless if repeated, they carry severe consequences for the victim which cannot be counteracted by means of criminal law. The tragedy of stalking victims lies in the fact that a persecutor may intimidate his victims and force them to change habits and plans, to live in constant fear. Stalker often causes huge mental suffering through actions which, under Polish law, are legally indifferent. What is also important is that actions of a stalker do not have to result from his or her wrongful intentions or desire to annoy the victim (in many law systems malicious intention of the stalker is a sine qua non for criminalization of stalking). Sometimes the persecutor acts with good intentions (the desire to win the love of a loved one), nevertheless behavior of the stalker is frightening for the victim. Results of a study taken to estimate the scale of stalking differ between countries where such studies have been conducted. This discrepancy is probably influenced by the definition assumed by researchers, research methodology, sample size and selection, but also by the different temperament of the inhabitants of these countries.