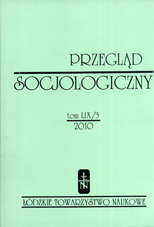 Summary/Abstract: Postcolonial theory, or postcolonialism, is a poststructural critical approach dynamically developing since 1980. In the recent decade one can observe increasing doubts about this focused on colonizer – colonized relation perspective. This article reconstructs the stages of the rise of postcolonial theory and such dimensions of this approach which concern gender matters. The stress is put specially on the confrontation between postcolonial claim of regaining national-cultural subjectivity and feminist perspective. The institutionalization of postcolonial theory and apparition of a group of significant female researchers, majority of whom comes from ex-colonies, contributed to emergence of a sociological-ethnographical variant of postcolonialism: an interventionist one. The practices in which the constructed in politically and culturally dominated societies womanhood express itself are becoming an object of postcolonial analysis. At the turn of the XX and XXI centuries the analysis of postsoviet world based on the postcolonial categories emerged. In the Eastern European variant of postcolonial theory the key position is taken by the vision of a enslaved nation as a woman, inter alia in the analysis by M. Janion, E. Thompson (Poland) and N. Shevchuk-Murray, T. Hundorova (Ukraine). Despite the hopes interlinked to the adaptation of postcolonialism to studies of Eastern Europe, this approach, similarly to classic postcolonial theory, is strongly criticized. Is the feminization of this perspective about to disrupt it from inside?