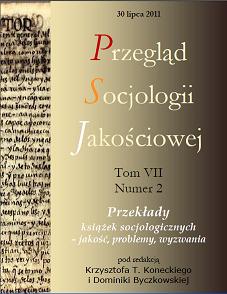 Summary/Abstract: Michel Foucault introduced the notion of dispositif of sexuality in The Will to Knowledge (1976). Soon afterwards he took part in a discussion organized by a French magazine “Ornicar?” during which he was asked to explain synthetically his concept of dispositif. Over the next decades this short, and rather forced utterance was translated into German and English. These translations differ from each other not only with regard to their solutions how to substitute a French term dispositif with another word – accordingly German or English – but also because of a variety of details that are meaningful for the profiles of dispositif analysis and based on Foucault's thought postulated in research. This theoretical and methodological perspective has being developed since Foucault's death in 1984, especially since the 1990's. One can indicate numerous and significant differences between the German- and English-language dispositif analysis, as well as between both of them and the Foucault's original concept. There is a need to question if the researchers who identify dispositif with a social network or with a material infrastructure of discourse (inter alia communication technology and social practices mediated through this technology) still follow Foucault's concept of power-knowledge to which they refer so willingly? This problem seems to be notably important at present – when more and more researchers in Poland show their interest in dispositif’s concept. Therefore, a demand to translate its key terms into Polish emerges. In this article the dilemmas of Polish and other translations are presented on samples of several Foucault's utterance in "Ornicar?" translations and fragments of contemporary texts from the field of German- and English-language dispositif’s analysis