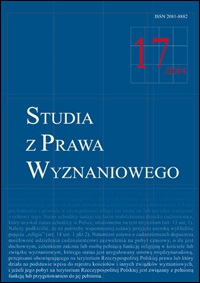 Summary/Abstract: This study casts light on the circumstances and effects of changes to the legal acts defining the legal framework of the activities of religious orders in post-war Poland. Until 1949, religious orders had not been covered by the regulations on the creation and legalization of secular associations. Pursuant to the decree of 5 August 1949, however, they were obligated to comply with the provisions of the Law on Associations. Failure to apply for the registration resulted in the dissolution of the order and the forfeiture of its assets by the state. Still, despite the submission of the applications as provided by law, the authorities refused to registered orders and did not maintain an official register of such entities, either. In point of fact, the communist regime only intended to develop such a legal context in which the law might be used as a tool of repression against religious orders. The actual aim of the 1949 amendment was not the intent to clarify the legal status of religious orders, which remained uncertain in the aftermath of the Resolution of the Provisional Government of National Unity of 12 September 1945 invalidating the 1925 Concordat. The authorities only intended to establish a strict state control over religious organizations and, by extension, gradually reduce their activity until their complete disappearance from public life. The content relies primarily on the analysis of the legislation and archival material gathered in the state and ecclesiastical archives in Poland.