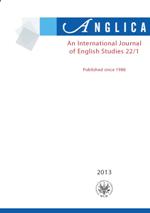 Summary/Abstract: The aim of this article is to present an ironic, grotesque, farcical and tragic dimension of totalitarianism in Martin Amis’s selected works. The author is going to analyse and juxtapose three dictatorial ideologies: Nazism, Communism and Islamic fundamentalism while showing Martin Amis’s distinctive literary techniques, styles and modes used with reference to the examination of each of these three issues. Firstly, the emphasis will be placed on the exploration of those novels of the British writer that present Nazism and Communism and their aftermath, namely Time’s Arrow, House of Meetings and Koba the Dread: Laughter and the Twenty Million. This section will present ironic, grotesque, satirical as well as tragic facets of these two totalitarian systems depicted by Martin Amis. The subsequent part will focus on the issues of Islamist fundamentalism, terrorism and the relations between Islamist and Western culture at the turn of the third millennium. Here, the author is going to scrutinize Martin Amis’s novel The Second Plane: September 11: Terror and Boredom as well as she will refer to the writer’s miscellaneous interviews, talks and discussions. Similarly to the previous part devoted to the analysis of Nazism and Communism, this one will draw the attention to Amis’s grotesque, farcical and ironic delineation of Islamic fundamentalism, yet here, a special emphasis will be placed on the writer’s description of a political and social aspect of this matter rather than on his concern for linguistic an stylistic innovation. Finally, by juxtaposing these three totalitarian ideologies in Martin Amis’s selected fiction the author is going to show numerous interpretations and sides of this subject matter, ranging from political and social debate to cultural and literary criticism.