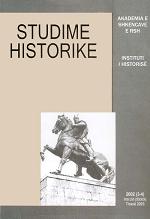 Summary/Abstract: The Ottoman time marks one of the most interesting periods even from the viewpoint of the changes observed in the Hebrew history of Albania. During the new Hebrew exodus (West-East) whose waves came growing continually during the XVIth century the Albanian lands were changed not only in a transition bridge of the Hebrew refugees towards East, but also in important reception-place and settlement-place for them. Just the town of Vlorë which not only had a Hebrew tradition as component element of its mediaeval history, but also already represented one of the most renowned forts of the Ottoman Empire in the Adriatic Sea, became at the same time one of the biggest settlement-places of the Hebrew refugees of the end of the XVth and the beginning of the XVIth century in the Balkan areal. The data of the Ottoman sources of the beginning of the XVIth century for the town of Vlorë are very significant to understand the direct connection between the interesting dynamics of the Hebrew emigration from West towards the Balkans and the quick evolution of the social-demographic situation of the town in question.