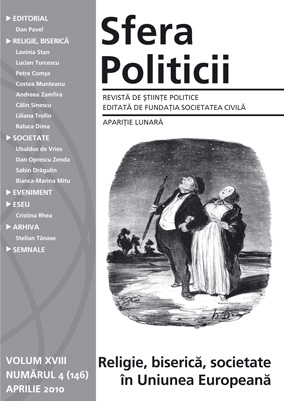 Summary/Abstract: Following two levels of expres-sion, European and national/local, this paper examines the instru-ments and resources that the Romanian Orthodox Church can use in order to fulfill its role as an actor in the European govern-ance. The text is structured in three parts: the first part presents the framework in which the Churches operate, as actors of the European governance, the mechanisms and reactions involved; the second part exam-ines the Romanian Orthodox Church's presence at the Euro-pean level (ROC’s Representation in Brussels, the tasks performed within the Conference of Euro-pean Churches and the interrela-tion between the two forms of representation), while the third part scrutinizes ROC’s behavior at the national/local level of gov-ernance: the topic related to a coherent articulation of a view about its presence in society, the necessary conditions for building a partnership with the state, the other Churches and the laity.