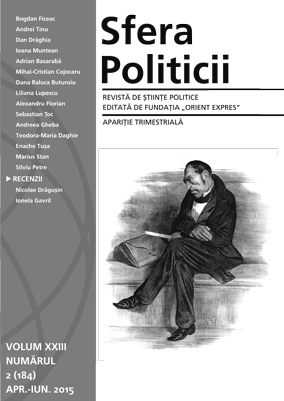 Sfera Politicii
The Sphere of Politics

The Sphere of Politics, edited by the Civil Society Foundation, first came to light in December 1991. The magazine’s format was that of an A4 sized paper, the same kind of paper being used both for the front and back cover as for the rest of the magazine. Recalling its first issues, while taking into consideration the context of its publication – the first years of the post-communist era – there should be no surprise the aspect of the magazine could have given the impression more of a newspaper, or rather an “information brochure”, than of a Political Science Review. Still, even at those times, The Sphere of Politics came out in approximately 50 pages, a number which remained constant until the end of the nineties. The first issues have been published before the institutionalisation of the field of Political Science (be it study field or research area) could have taken place. Actually, the first faculty of Political Science has been established in the fall of 1991, at University of Bucharest; whatsoever, its name was employed only to introduce Social Sciences by and large, as a wider frame for Political Science. It was only in 1996 that Political Science established itself as a proper component of the higher education system. It was in this context that the Sphere of Politics embarked on a new publishing strategy, with the aimed target of creating its own dedicated public, throughout comments, bearing the names of members of the academic community, high ranking dignitaries or even politicians. While during the first half of the nineties the authors originated from miscellaneous domains, at the end of the decade they were academics, scholars and researchers, all showing high interest in the recently created field of Political Science. They were either first generation graduates in Political Science, or graduates with majors in Sociology, Philosophy or History (all of which were involved in the new ongoing research programmes); or, they could have also been literary critics or researchers who were active during communist era as well. For a short while (between 2006 and 2008), the magazine was published twice a month, but since January 2009 it has returned to its original format, as a monthly publication. Presently, one of the tasks of The Sphere of Politics is to facilitate the promotion of young authors, Ph.D., MA or evens high qualified senior students. The members of our editorial board are undoubtedly some of the best in the field. Either fresh graduates, young researchers or scholars who graduated during the 90's, they all own a degree or even a double degree in Political Science or auxiliary fields, like Sociology, Philosophy or Communication Studies. This can be applied to our permanent or occasional collaborators, too. As for our target, this is supposedly made of academics, scholars, researchers and last but not least young students in the above mentioned fields, interested in improving their knowledge and expertise. The articles are written mostly in Romanian, but we happily greet English, French or Italian written contributions as well. The texts should be always joined by an abstract and a sequence of key-words, compulsory drafted in English. The selection of the articles is made by the members of our editorial board, sometimes according to specific themes. Other scholars, researchers or members of the academic community are always asked for professional expertise. Starting with 2015 the journal will be issued quarterly.