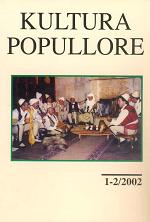 Summary/Abstract: The witch, a figure found in myths, rites and beliefs of the Albanians, comes out even as artistic personage in the Albanian folklore in two different aspects. Firstly, she comes forward in such functions in which doesn’t preserve almost no connection with her ethnological apperances. Secondly, as a direct ethnological load. The second phenomenon is found reflected in various folkloric genres and appears in the practice having her functions or loads of the ethnological aspect. But the article has as its object the study of the witch as artistic personage in the Albanian folklore. As such she is encountered only in fantastic stories, in the functions of an auxiliary personage, in the service of the evil, in a supranatural aspect. The witches are only component parts in the development of a general subject, presenting themselves as connecting rings of the actions, and there is never a general subjects developing around them. The figure of the witch in the fantastic stories obtained a growth of the social load. There are no numerous ethnological explanations in the fantastic stories where is present the witch, because in the folklore the aetiology is not substantial, and the attention is focused on the social aspects of the man’s life, on their reflection on a mainly esthetic aspect. Throughout the work it is given answer to a series of questions, as: from where is taken the witch as figure of the Albanian folklore, has she preserved its original qualities, which are the changes she has undergone, if there are changes, of what nature are they, with what functions has come the figure of the witch in the time of her inclusion in the folklore.