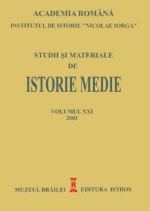 Summary/Abstract: The squadron of the Ottoman Danube was created with a view to defending the border, as an instrument for conquests in the Central Europe and for commercial purposes. It was independent of the Central fleet. The ships belonging to it can be divided into two categories: the ones, specific to the Danube and used by the inhabitants living on both shores of the river many centuries before the Ottoman conquest (nasad, navrad, çernik, ladya, şayka); the ones used by the Ottomans in the fleet from the Black Sea and the Eastern Mediterranean Sea (kalite, kayık, sandal). The head-quarters of the Danubian squadron has been better known since Süleyman’s reign and Buda’s conquest (1541). It is in 1544 when the oldest official documents mention the Danubian Admiral (Tuna kapudanlık) and Admiralty (Tuna Kapudanlığı), with 2 sectors: from Vidin to Blegrade and from Belgrade to the Mouths of the Danube. We can notice its similarity to the Romano-Byzantine organization of the Danubian fleet.