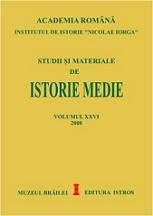 Studii si Materiale de Istorie Medie was founded in 1965 with the aim to publish research articles dealing with the Middle Ages in Romanian and world history as well as primary source from Romanian and foreign archives. The review was published by the “Nicolae Iorga” Institute of History of the Romanian Academy but welcomed papers from medievalists from all over Romania. Throughout the years, the names of outstanding historians such as: Maria Holban, P.P. Panaitescu, Alexandru Elian, Damian Bogdan, Mihai Berza, Francisc Pall, Dan Simonescu, Emil Vârtosu, Paul Cernovodeanu can be found in the tables of contents. After 1990, the review also accepted articles from foreign researchers, including: Claire Dolan (Canada), Bernard Doumerc, Benoît Joudiou, Matei Cazacu (France), Andronikos Falangas, Fannis Dasoulas, Dumitru Nastase (Greece), Ivan Biliarsky, Snejana Rakova, Penka Danova (Bulgaria), Teréz Oborni, Levente Nagy (Hungary). SMIM was also a school for generations of young medievalists who saw their first articles printed in the review.

Between 1956 and 1989, the review was published intermittently; it became an annual after 1990. There are 20 volumes published to date. Studii şi Materiale de Istorie Medie is a well-regarded academic publications in Romania and abroad. The editors pay particular attention to the sections dedicated to Addenda et Corrigenda, with the aim to encouraged debates, and Reviews and Notes, where the most recent titles in Romanian and international medieval history are presented.

Currently, our annual is distributed in over 120 university library and research centres in the EU and elsewhere.