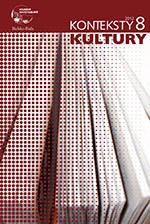 Summary/Abstract: The text is an attempt to compare the Twenty-Second Voyage by Stanisław Lem and In partibus infidelium by Jacek Dukaj. Both stories describe the fate of the Catholic Church after the discovery of sentient races in the space and further stages of interplanetary evangelization. A closer analysis of the texts shows that both writers use a futurological method. Lem projects a return to what already had been, ornamenting his story with medieval setting (martyrdom, crusades). Dukaj references a certain principle governing the history, according to which the future will be governed by the same laws as the past, but not necessarily resulting in exactly the same situation. History is made of successive stages, recurring cyclically with a certain difference. Dukaj’s story also shows elements of Gnostic, evolutionist, as well as techno-Gnostic thinking, according to which the scientific and technical development becomes a determinant of progress.