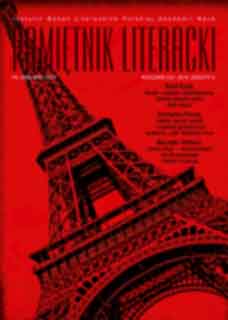 „Nikt z krytyków w tym stopniu, co Pan, nie wniknął w »istotny sens«...”
“None of the critics to the extent as You has pierced into the »crucial sense«”

Summary/Abstract: Between 1959–1995 Teodor Parnicki and his second wife Eleonora exchanged over 60 letters and postcards with Jacek Łukasiewicz, a literary scholar, poet, lecturer, and critic. The large collection preserved in the addressee’s archive offers, for a Parnicki researcher, numerous valuable pieces of information about the writer’s life, his creative process, and a number of interpretative tropes. The first letters sent by Parnicki from Mexico, where he stayed as an emigrant, refer mainly to Łukasiewicz’s critical sketches on Parnicki’s novels. The following letters speak about the current matters, frequent requests connected with the Parnicki’s removal to Poland, as well as the writer’s health matters. Publication of the collection, crucial due to both correspondents’ contribution to culture, is included into a renaissance of interest in Parnicki’s writing and to processing his so far unpublished materials.