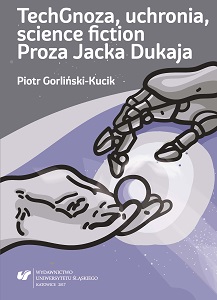 Author(s): Piotr Gorliński-Kucik
Subject(s): Politics / Political Sciences, Language and Literature Studies, Studies of Literature, Comparative Studies of Religion, Religion and science , Comparative Study of Literature, Polish Literature, Government/Political systems, Culture and social structure , Theory of Literature
Published by: Wydawnictwo Uniwersytetu Śląskiego
Keywords: science fiction; gnosis; transhumanism; utopia; Polish prose
Summary/Abstract: The subject matter of the present monograph, entitled “TechGnosis, Uchronia, Science Fiction. The Prose of Jacek Dukaj” is the analysis and interpretation of the prose works of the author of "Ice", conducted with the adoption of selected categories, such as techgnosis, conservatism, futurology, and uchronia. The first part of the book primarily concerns the relation between the writings of Jacek Dukaj and the writings of Stanisław Lem. Piotr Gorliński-Kucik describes the creative path of the author of “Lód” [“Ice”], and next considers the possibility of applying the Harold Bloom’s “anxiety of influence” theory to the relation between these two prose-writers. In the next chapter, “Project ‘Autoevolution’,” the author attempts to situate the prose by Dukaj against posthumanism (the reflection upon the possibility of non-human subjectivity), and the evolution of man and technology, as well as to juxtapose the content of the novel by this author with the repertoire of H+ concepts specified in essays by Lem. The following chapter, “Dialogues” is devoted to polemical references to the writings of the author of “Solaris”, made by Dukaj in his short stories “Irrehaare”, “In Partibus Infidelium”, and “The Eye of the Monster”. In “The Economy of a Small Form”, the author discusses quasi-reviews (here referred to as “virtual literature”), and then continues with the description of the essays on books not yet written, which have been done by the author of Ice; one of these texts, “Who Wrote Stanisław Lem?”, has become a parody-tribute and a kind of mini-monograph on the works of the author of “Solaris”. The second part of the present work primarily concerns the key categories: techgnosis and uchronia. In the chapter “The Scorched Earth Policy”, the author suggests a typology of fictional universes constructed by Dukaj and describes the narrative model of his novels. The most extensive chapter of the work, “The Economy of Salvation. Ethics and Aesthetics of Gnosis,” has been devoted to the conservative society as portrayed in the novel by the author of “Lód” [“Ice”], and to gnostic soteriology – here, salvation is bestowed only upon narrow elite (this being the “economy of salvation”). Dukaj describes highly advanced technology by means of language that usually serves to designate the characteristics of human spirituality, which has been examined here in the context of postsecularism. Two other strategies of describing technoscience in the context of secularization have also been given some thought (in the short story by Lem and the novel by Jules Verne). In the chapter “Transhumanist Uchronia”, the category of uchronia has been further specified as “time that is not (yet).” The next subject matter that has been taken into consideration is the unstable subjectivity of the posthuman, that is, the man of virtual (post-postmodern) era, specifically with the reference to the categories of sexuality (in the discourse of post-genderism and cyber-feminism). Dukaj has then been situated in the generation of “the followers of Gombrowicz” (as opposed to the generation of “the followers of Schulz”), and therefore looked upon as operationalising the artistic language of the author of “Ferdydurke”. Also, a complex game based on a parody-tribute and pastiche (a quotation of style) played by Dukaj with the texts of Gombrowicz and Aristotle has been characterised. The chapter concludes with an attempt at interpreting “Inne pieśni” [“Other Songs”]. Two chapters have been devoted to one of the most important novels by Jacek Dukaj: “Lód” [“Ice”]. In the first one, the author has taken into account the construction of alternative history, also in the context of a historical novel. The other chapter deals with postmodern intertextuality and the problem of memory and narration, and, in addition, offers an attempt at interpreting the novel. The final chapter of the present monograph concerns the latest novel written by Dukaj, entitled “The Old Axolotl”. Its reading confirms the path of interpretation outlined in the readings of earlier works, at the same time allowing to take a look at the poetics of an e-book novel. The present monograph, “TechGnosis, Uchronia, Science Fiction. The Prose of Jacek Dukaj”, is aimed at acknowledging the intellectual and artistic value of the prose by Jacek Dukaj, and at integrating the reflection upon its nature into the domain of academic discourse.