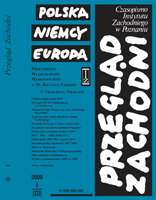 Summary/Abstract: The article reviews the phenomenon of reception of the Second World War in German art after 1945. The pivotal stages are presented on the examples of key artistic events and their reception. It is the story of the breaking of a conspiracy of silence in art and of seeking an adequate form that would enable a confrontation with the past. The way led from a triumph of „mute” abstraction, through the rebellion of neo-expressionists against the suppression of the war years from memory, to a pluralism of forms and utterances on the theme of German history. The text also shows how artists, after winning for themselves the possibility of speaking up in the ongoing debate on the consequences of the Second World War, contribute to a continual expansion of the horizon of collective memory.