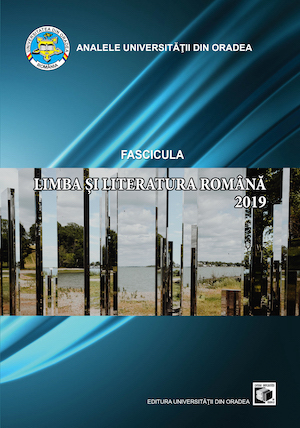 Analele Universităţii din Oradea Fascicula Limba şi Literatura Română (acronym ALLRO) publishes papers in the field of literature, literary criticism, literary and cultural theory, interdisciplinary study of literature. ALLRO specializes in bridging the world of academic literary criticism and theories with evaluations on everyday literary phenomenon as reflected in the Romanian literary magazines and cultural events. ALLRO aims to harmonize two approaches of criticism: the academic, research-oriented study of literary texts, on one hand, with the critical valuations expressed by influential, value-oriented critics in the pages of the numerous active Romanian literary magazines, on the other hand.

The Annals of University of Oradea, Psychology Installment (form 2001) is a biannual peer reviewed journal that publishes scientific articles corresponding to one of the following categories: 1. studies that entail empirical data obtained from research designs and methodology applied using the scientific method (experimental, correlational, metaanalitical, case studies etc.) in order to identify recurring patterns of interactions between certain aspect of psychological variables and explain the relationship between them; 2. theoretical synthesis which emphasizes the cumulative character and the current status of the scientific knowledge in a certain domain; 3. thematic interviews wich prestigious personalities which are active in the domain of psychology and also comments regarding important scientific manifestations; 4. reviews of book and articles that had a major impact at a paradigmatic level in the field of psychology. The Psychology Installment (http://socioumane.ro/blog/fasciculapsihologie/) is accredited by the CNCSIS (www.cncsis.ro) from 01.05.2006. The publication has been ceased in 2010. From 2011 continues under the title "Journal of Psychological and Educational Research JPER" 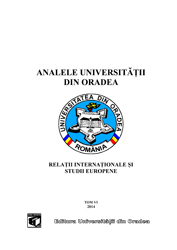 Confluente, Annals of the University of Oradea, Modern Literature Fascicle, is an academic, double blind peer-reviewing journal that is published once a year.

TCR specializes in bridging the world of academic literary criticism and theories with the aliveness of everyday literary phenomenon as reflected in the cultural media and book-production.

The topics covered by our journal in its 2 generous sections – Literary-Isms & Cultural-Isms are as they follow:

As a research journal, the beginnings can be traced back to the academic year of 1966-1967, when, under the name of Lucrari stiintifice, the section of academic research emerged at the University of Oradea. In 1991the research journal changed its name and template, focusing on topics of immediate relevance and on thorough going studies, on cultural studies, analytic articles on Romanian literature and comparative literature. In 2006 emerged Confluente, a Modern Literature Fascicle, including academic literary studies in English, French, German and Italian. In 2012 the Romanian Ministry of Education and Research ranked our journal category C. 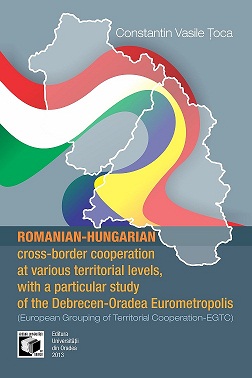 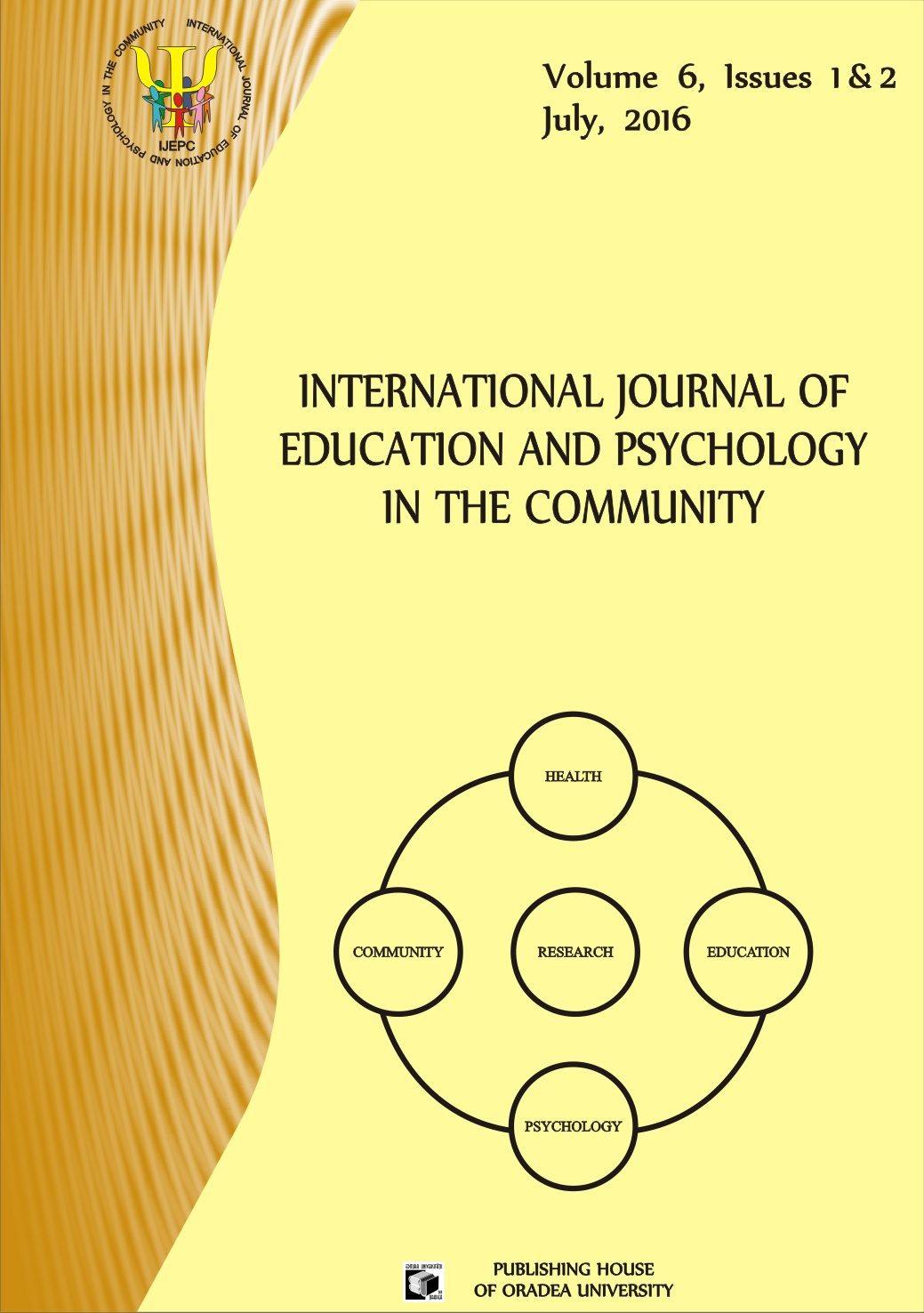 International Journal of Education and Psychology in the Community (IJEPC)

The International Journal of Education and Psychology in the Community (IJEPC) is a peer reviewed journal that publishes original empirical and theoretical studies and analyses in education and psychology which aim to integrate the major factors that relate the individual and the environment, within and across complex social communities. The editors seek to publish articles with emphasis on empirical studies across a wide range of methodological paradigms including experimental, educational, clinical, criminological, industrial, and social psychology. The journal invites also theoretical manuscripts that make a clear and significant contribution in education or psychology, that address the conceptual, methodological, and practical challenges and major determinants of individual in the social context, person-environment interactions, and analysis of the broader contextual factors. 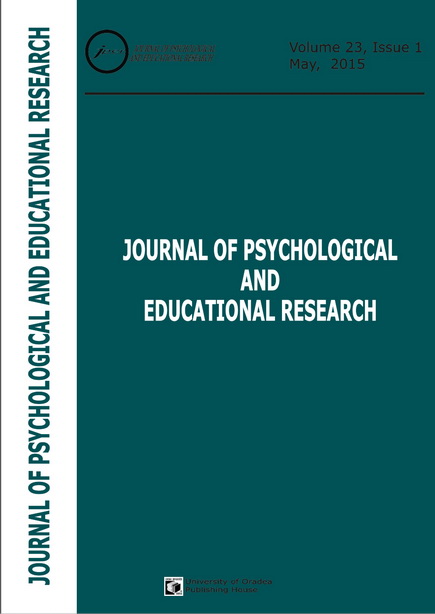 The Journal of Psychological and Educational Research (JPER) (ISSN: 2247–1537 ISSN-L = 2247–1537) continues Analele Universităţii din Oradea – Fascicula Psihologie / The Annals of University of Oradea, Psychology Installment (ISSN: 1583–2910), integrating educational issues into the body of psychological research. The Journal of Psychological and Educational Research (JPER) is a biannual peer reviewed journal that publishes scientific articles corresponding to one of the following categories: §Studies that entail empirical data obtained from research designs and methodology applied using the scientific method (experimental, correlational, metaanalitical, case studies etc.) in order to identify recurring patterns of interactions between certain aspects of psychological and educational variables and explain the relationship between them; §Theoretical synthesis which emphasizes the cumulative character and the current status of the scientific knowledge in a certain domain; §Thematic interviews with prestigious personalities which are active in the domain of psychology, education and also comments regarding important scientific manifestations; §Reviews of book and articles that had a major impact at a paradigmatic level in the field of psychology and education.

The Journal of School Psychology continues publishing under the title Romanian Journal of School Psychology. The Journal of School Psychology is a biannual peer reviewed journal that publishes scientific articles from the domains of school/educational psychology, career and school counseling. The following types of articles are taken into consideration for publishing: 1. empirical research studies using experimental, correlational or metaanalitical methods in order to identify and explain relations between psychological variables; 2. theoretical synthesis which describe a new theory/set of theories/connections of theories and the personal contribution of the author; 3. interviews with prestigious personalities active in the domain of the journal; 4. description of scientific events such as conference, summers schools etc.; 5. reviews of books and articles relevant for the domanin of the journal. 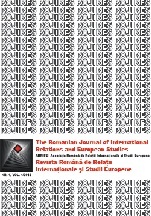 The Romanian Journal of International Relations and European Studies (ROJIRES) is an initiative of the Romanian Association for International Relations and European Studies (RAIRES). The Romanian market has seen its fair share of publications dedicated to debates and information on international relations or European issues. Moreover, in recent years, several high-profile magazines, journals or newspapers have been translated into Romanian or have developed Romanian editions. The quality of the comments and media reports on international or European issues has increased considerably. It is in this particular context that the editors have undertaken the serious task of publishing this journal and it is in this context that we must make clear the objectives of the Journal. ROJIRES aims to set new standards in terms of international relations or European studies research in Romania. Both the international relations and the European studies fields have been marred by a profound lack of expertise – it is the expertise of the most important global and Romanian academics that we wish to build upon in order to develop a venue for fresh and relevant debates pertaining to today’s most serious or grave international or European problems. Both the expertise the board and the contributors will provide and the debates we hope we will foster are paramount not only to a lively and healthy academic undertaking, such as the journal, but to other linked activity fields in the wider social environment, media and the political sphere being only the most prominent. ROJIRES aims to identify the key issues, to analyze public policies and even to submit policy recommendations, thus bringing together the academic environment and the political deciders. Furthermore, we wish to develop a publication venue for young researchers and scholars, as well as a forum for academic debate. ROJIRES takes quality very seriously and will ensure that all of the published articles or reviews will be subjected to a double-blind peer review process. The Journal aims to promote a deeper research, study and understanding of the fields of International Relations and European Studies, by bringing together the foremost Romanian researchers and important names from the global academic environment and by striving to promote research with a strong interdisciplinary emphasis. The Journal is open to contributions from various paradigms and theoretical backgrounds and does not show a preference towards a particular theoretical, methodological or epistemic approach. The editors of the Journal, as well as the organization that has supported and funded this initiative look forward to achieving its goals and would like to thank the reviewers, contributors and the partners of ROJIRES, hoping that the readers find this current issue a pleasant and instructive reading! 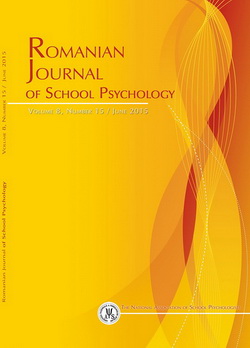 The Romanian Journal of School Psychology is a semi-annual peer-reviewed journal, supported by The National Association of School Psychologists (Asociaţia Naţională a Psihologilor Şcolari). The purposes of these recommendations are to facilitate the manuscript preparation and to set the premises for a real and consistent exchange of information between authors and readers. The journal takes into consideration for publishing articles from the field of school / educational psychology or related fields, corresponding to one of the following categories: (1) research that entail the scientific method (experimental, quasiexperimental, correlational, metaanalitical, case study etc.) in order to explain various aspects of human activity in the educational context; (2) theoretical syntheses which describe a new perspective / a set of ideas / connections between theories and which emphasize the personal contribution of the author(s); (3) interviews with prestigious personalities from the field of school psychology; (4) reviews of books and articles relevant for the field of school psychology; (5) descriptions of scientific events (conferences, summer schools, specialization courses, round tables etc.) relevant for the field of school psychology. The accepted articles will be published in one of the sections of the journal: Studies and Research, Interviews, Reviews, Scientific Life.