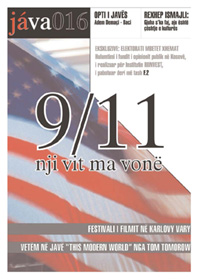 Weekly newspaper “JAVA” (The Week) is a unique newspaper all over Albanian lingual territory. “JAVA” is the only Kosovar media partly published in main Albanian speaking idiom – Gheg Idiom. Gheg Idiom is almost a banned language of Albanian Culture. Designed and established as a project, weekly newspaper “JAVA” (THE WEEK) is a tool and a concrete example how to increase the sense of tolerance firstly within Albanian Culture and through it in a post-war region, as Kosovo is today. “JAVA” is promoting awareness for a civic courage and action through attempts of safeguarding linguistic and cultural diversity as essence of European Idea, specially focusing the importance of debating Identity in general, and the eager need for Supra National Identity of Kosovo in particular, especially after the terrible ethnic hatreds and war conflicts in former Yugoslavia. Main objectives of weekly “JAVA” designed as a project, are: - Diversity awareness and alleviation of language barriers promoting human interaction and increasing the sense of tolerance; - Debating and contributing to discussion over European Identity in general, and the Kosovar Identity (as a kind of Supra-Ethnic Identity) in particular, as a campaign of supporting and safeguarding inclusiveness, flexibility and multitude of attachments and identifications; - Commitment to defense cultural diversity as an ethical imperative, inseparable from respect for human rights and dignity; JAVA as an libertarian concept of the press, pointing on Diversity and Identity as a main not only European objectives but especially as a main issues and challenges of post-NATO-intervention Kosovo, is trying to prove, as a distinctive example, how could a media meet its aim – Independence. Independence not only in economic and editorial meaning of the word, but independence from the Official Truths, from National and Nationalistic programmes and ideologies, from ideas and ideologies of Unification and National homogeneity which are difference-blind and urge for sacrifices. Succeeding on independence from the Official Truths it is the first step on the long way to build a professional and responsible media. Challenging an Official Truth as Standard Albanian Language is (established on 1972, on the peak of Enver Hoxha’s dictatorship), which is established only upon one of Two-Idiom- Albanian – Tosk Idiom (spoken on southern of Albania) - weekly “JAVA” is not only questioning a “Truth” and is alarming the ban over one language (Gheg), but it practices on real the need for diversity and through opening the pages of JAVA for being gheg-different, JAVA is promoting and establishing an ongoing workshop on tolerance. JAVA has been designed as a discussion forum that contributes greatly to the civil society in Kosovo.