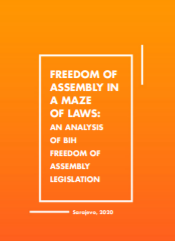 Author(s): Amila Kurtović
Contributor(s): Mariña Barreiro Mariño (Editor), Aida Spahić (Translator), Emina Bošnjak (Editor)
Subject(s): Civil Law, International Law, Human Rights and Humanitarian Law, Evaluation research
Published by: Sarajevo Open Centre
Keywords: BiH; legislation; freedom of assembly; organizer obligations; location and time of the assembly; assembly ban; OSCE; human rights;
Summary/Abstract: This analysis is organised in chapters that address the most important thematic areas for the exercise of the right to freedom of peaceful assembly. First, the paper presents the research implementation method and a summary of documents containing key international recommendations for regulating the freedom of peaceful assembly. As a starting point for the analysis, the definitions of public assembly protected by BiH legislation are discussed, and a special focus is placed on peaceful assembly and public protest as the most important forms of public assembly for the purposes of this research. Significant space is devoted to the notification requirement, an area with probably most contradictions among the provisions of all the laws on public assembly in force in BiH. This aspect of the exercise of the right to freedom of peaceful assembly has been analysed primarily in light of a comparison of the notification system and the authorisation system, which is explicitly criticised by all relevant international recommendations. This is followed by restrictions, as well as privileges that the legislative framework subjects assembly organisers to, depending on their affiliation with certain categories or groups (e.g. restrictions for foreign nationals as opposed to privileges for trade unions). This chapter also reflects on a special type of assembly - unorganised, spontaneous assemblies as an immediate response to an event or an occurrence in the society, making assembly notification unfeasible. National legislation requirements have also been analysed with respect to data requested for assembly notification and the (non-)harmonisation of the deadlines and international standards. The issue of assembly location is also extensively discussed, as there are significant discrepancies between local laws, but also local laws and international standards due to bans on assemblies in many otherwise publicly available locations. The actions of authorities aimed at making it difficult for the organisers to choose a location they consider most appropriate for their peaceful assembly or public protest are visible. Assembly time is discussed in light of restrictive provisions in certain laws that limit the possibilities by imposing specific timing. Legal remedy in case of imposed restrictions on public assemblies is addressed from the perspective of the necessary urgency of the legal protection procedure, i.e., the need to complete the entire procedure in a timely fashion, from the decision on the ban to deciding on the appeal, so that the organisers can continue with assembly planning. The differences in the responsibilities expected of police bodies in providing security at peaceful assemblies and the duties and responsibilities imposed on organisers, leaders and stewards of public assemblies are compared. This chapter addresses a particular concern given that the guiding principle of freedom of peaceful assembly is that the competent authorities have a primary obligation to facilitate the enjoyment of the right to freedom of peaceful assembly. The last part of this paper addresses the provisions governing the reasons why police authorities may ban or interrupt an ongoing assembly and the sanctions provided by law. Finally, specific recommendations are given from the perspective of international standards that could significantly improve freedom of assembly in BiH through appropriate advocacy activities.