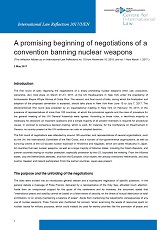 Author(s): Miroslav Tůma
Subject(s): International Law, Civil Society, International relations/trade, Security and defense, Present Times (2010 - today)
Published by: Ústav mezinárodních vztahů
Keywords: ban of nuclear weapons; Red Cross;
Summary/Abstract: The first round of talks regarding the negotiations of a treaty prohibiting nuclear weapons (their use, production, ownership, etc.) took place on March 27–31, 2017, at the UN Headquarters in New York under the presidency of Ambassador Elayne Whyte Gómez of Costa Rica. The second, and final round of talks, during which the finalization and adoption of the proposed convention is expected, should take place in New York from June 15 to July 7, 2017. The aforementioned first round was preceded by an organizational meeting in New York on February 16, 2017, in the presence of representatives of more than 100 countries, at which the provisional agenda and the rules of procedure for the general meeting of the UN General Assembly were agreed. According to these rules, a two-thirds majority is necessary for decisions on important questions and a simple majority of all present members is required for procedural issues. In contrast to consensus decision-making, which is valid, for instance, for the Conference on Disarmament in Geneva, no country present at the UN conference can veto an adopted decision.The first round of negotiations was attended by around 130 countries, and representatives of several organizations, such as the UN, the International Committee of the Red Cross, and a number of non-governmental organizations, as well as surviving victims of the US-caused nuclear explosion in Hiroshima and Nagasaki, which are called Hibakusha in Japan. All countries that own nuclear weapons, as well as a large majority of Alliance states, including the Czech Republic, and partner countries relying on nuclear protection, especially protection by the US, boycotted the meeting. From the Alliance states, only the Netherlands attended, and from the European Union states, the already mentioned Netherlands, and also Austria, Sweden and Ireland participated. From the partner countries, Japan was present.