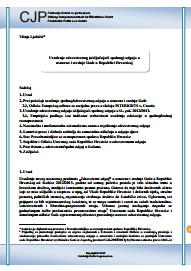 Author(s): Višnja Ljubičić
Subject(s): Gender Studies, Education, Law, Constitution, Jurisprudence, Constitutional Law, International Law, Public Law, State/Government and Education, Health and medicine and law, EU-Legislation
Published by: Fondacija Centar za javno pravo
Keywords: Public law; constitution; Constitutional Court; education; health education; sex education; primary education; secundary education; children; ECHR; human rights; Republic of Croatia;
Summary/Abstract: The author analyzes the introduction of health education, including sex education, into the system of compulsory primary and secondary education in the Republic of Croatia, from the first initiative of the late 90s to the present time. The author writes about public controversy between traditionally conservative and liberally progressive social forces regarding the right of parents, who hold certain world views to make independent decisions about the education of children, and, on the other hand, the constitutional obligation of the State to ensure children's right to a full and harmonious development of their personalities. The issue is addressed from the perspective of the case law of the European Court of Human Rights, which has already dealt with this issue, and the decision of the Constitutional Court of the Republic of Croatia, which emphasizes the importance of democratic, pluralistic approach in the creation of educational contents, especially when it comes to sexual education of children. How to put an end to the controversy, whose intent is to dispute the school's program of sex education on the basis of religious and/or political beliefs, still is an open question.