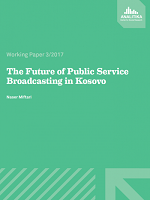 Author(s): Naser Miftari
Contributor(s): Mirela Rožajac-Zulčić (Editor)
Subject(s): Politics, Media studies, Communication studies, Public Finances, ICT Information and Communications Technologies, Socio-Economic Research
Published by: Analitika – Centar za društvena istraživanja, sva prava pridržana
Keywords: Kosovo; media; public service broadcasting; finances; regulations; socio-political and economic context; digitalization;
Summary/Abstract: With a population of 1.8 million, where Albanians make up more than 90 percent, Kosovo is the smallest and the last territorial unit that emerged as an independent state from former Yugoslavia. Formerly, it had the status of an autonomous province in Yugoslavia and later Serbia. Then for almost a decade before declaring independence in 2008 Kosovo was under the functional governance of the United Nations Mission in Kosovo (UNMIK) a UN-led mission mandated to run the day to day affairs and set up institutions of self-government in the post-conflict Kosovo, based on the UN Security Council Resolution 1244 adopted in June 1999. The development of the media sector in Kosovo was part of the UNMIK mandate and under a decade-long international management, the media sector experienced important transformation. The liberal media regime introduced by UNMIK was successful in ensuring the diversification of the media sector. However, the liberalization of the media sector and the post-conflict rapid increase in media outlets has led to a saturated and weak media market with declining sources of revenue. One of the major projects in the media sector initiated by UNMIK in post conflict Kosovo was to set up the country’s national public broadcaster – Radio Television of Kosovo (RTK). This paper investigates the current position, role and functioning of RTK – in a diachronic perspective - from its inception in 1999 to the present. It explores whether the overall context in which the RTK is embedded provides a favorable environment for its future prospects and continued development by focusing on the challenges that RTK is facing at present with respect to regulatory, financial, technological and socio-political trends. Upholding the independence and long-term sustainability of RTK are commitments that the Kosovo Government set out to meet upon embarking on the European integrations process. In 2015 Kosovo signed the Stabilization and Association Agreement (SAA) as a first important step towards the European integrations process. Meanwhile, the need to address the vulnerable position of RTK and ways to ensure its editorial independence, have been systematically highlighted in the EU’s Kosovo progress reports in recent years. From the EU perspective, nurturing the independence and financial sustainability of RTK is seen as a firm assurance that Kosovo will continue to have a universally accessible public forum where ideas, opinions and political views are presented and debated. It is also a firm assurance that the diverse segments of Kosovo’s multicultural landscape will feel represented. However, keeping on air a public broadcasting system fully dependent on state budget and not vulnerable to political interference, in Kosovo’s conditions, seems difficult, if not impossible. The paper is based on the review of different processes related to the developments around RTK. It includes analysis of legislation, strategic documents, official correspondence between Kosovo legislators, the European Broadcasting Union (EBU) and Organization for Security and Cooperation in Europe Mission in Kosovo (OSCE) as well as interviews with a number of interlocutors (media experts, RTK managers, former RTK consultants and other stakeholders). The analysis is framed within contemporary international debates on the future of PSB in a changing media environment and taking into consideration specificities of the development of PSB in post-communist societies and Western Balkan countries in particular. The paper also explores the current perspective and challenges for future development of PSB (e.g. digitalization and the EU driven perspective on commercialization etc.) In light of the new paradigm promoted by the EU with provisions that emphasize an inherent bias toward market liberalization, it is important to understand the implications that such policies might have for the prospects of the media market and the challenges that such policies entail with regards to access and future paths of the PSB development in Kosovo. In efforts to provide a coherent outlook on the present and the future of RTK the research is guided by three broad questions. The first question relates to the process of initial media policy adoption and the role of various actors played within it (e.g. influence of EU, local power elites, etc.). The second question explores the current situation of PSB and the extent of implementation of the current media policies. The third question seeks to provide answers to the future developments and prospects of PSB in Kosovo. The paper sets a theoretical and analytical framework against which the analysis of RTK is conducted. It is divided into three sections. The first section reflects on the contemporary debates on PSB on a global and EU level followed by an outline of relevant characteristics of PSB in postcommunist and Western Balkan countries. The section also takes into account some of the relevant approaches to explain the PSB transformation in the specific context. It explores propositions put forward by Jakubowicz and Sükösd8 on the idealistic, mimetic and atavistic orientations in the transformation of PSB in the former communist bloc, propositions that were further advanced in Voltmer, to see whether the same can be applied in the trajectory of the setup, development and current operation of Kosovo’s PSB. The second section provides a brief overview of the methodological approach used in this research. The third section, the analysis section, concludes with a discussion of the research findings and offers a set of recommendations that could be useful in addressing the current status of RTK and the challenges ahead in the future.