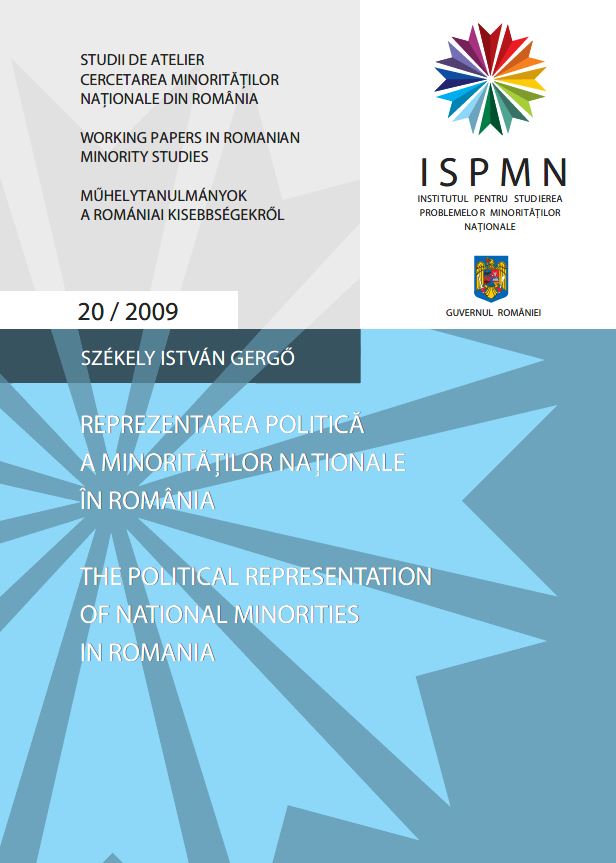 Author(s): István Gergő Székely
Subject(s): Political history, Government/Political systems, Electoral systems, Politics and law, Politics and society, Transformation Period (1990 - 2010), Inter-Ethnic Relations, Ethnic Minorities Studies
Published by: ISPMN Institutul pentru Studierea Problemelor Minorităţilor Naţionale
Keywords: National minorities in Romania; Representation; Participation of minorities in election process; Discriminatory nature of the candidature conditions;
Summary/Abstract: The paper consists of two main parts. The first part reviews the evolution of the most important aspects of Romanian electoral legislation concerning the representation of national minorities, both at the national and the local level. The second part presents the results obtained by the organizations of 19 minorities from Romania at the national elections (1990-2008) and the elections to the local and county councils (1996-2008). During the two decades that passed since the fall of Communism, Romanian electoral legislation underwent multiple changes, with both positive and negative consequences on the participation of minorities. Among the negative changes we have to mention the introduction (and subsequent raising) of electoral thresholds, and the adoption of double standards regarding candidatures for organizations represented in Parliament and those outside Parliament (obviously, with way more difficult conditions for the latter category). The higher thresholds introduced after 2000 had a negative impact on the number of minority representatives in the local councils, and with the exception of Hungarians and Germans, the minorities disappeared from the county councils. The double standards regarding candidature considerably watered down political competition within the minority communities, almost to the extent of granting political monopoly for the organizations in Parliament over the communities they claim to represent. On the other hand, Romanian electoral laws also contain special rules that provide electoral affirmative action for minorities. In the Chamber of Deputies the presence of minorities is almost guaranteed, due to the existence of special seats that can be obtained by reaching a symbolic alternative threshold. Affirmative action is present at the level of the local councils too, but it is far from being efficient. On the contrary, the special rule at the local level is ill-conceived: it is unable to counteract the underrepresentation of minorities, moreover, it can even deprive them of some seats they would have obtained, had they been treated like the political parties. Taking into account the underrepresentation of minorities (and the negative trend concerning this), the discriminatory nature of the candidature conditions and the inefficiency of the special electoral rule, the conclusions of the study call for a thorough redesign of the Romanian system of minority representation.