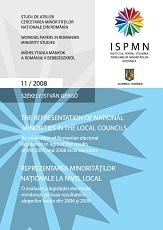 Author(s): István Gergő Székely
Subject(s): Government/Political systems, Electoral systems, Politics and law, Politics and society, Transformation Period (1990 - 2010), Inter-Ethnic Relations, Ethnic Minorities Studies, Politics and Identity
Published by: ISPMN Institutul pentru Studierea Problemelor Minorităţilor Naţionale
Keywords: Local councils; national minorities; Romanian electoral legislation; 2004 and 2008 local elections; "small" minorities;
Summary/Abstract: The paper assesses Romanian legislation regarding the representation of national minorities (except the Hungarians) in local councils. Most minorities are still seriously underrepresented in the local decisional fora, despite the existence of a special provision in the electoral law of 2004, that grants some sort of affirmative action for minority organizations. In order to evaluate the utility of this special provision, I re-analyzed the results of the last two local elections, comparing the actual results of the minority organizations to the hypothetical results they would have obtained in the absence of the special rule, that is, if they had been treated alike to the mainstream political parties. This allowed the identification of those cases when the minorities indeed benefited from the affirmative action provided by the law. Unfortunately, the scope of applicability of the special rule proved to be very limited, the minority organizations would have obtained most of their seats also without the application of the special provision. Moreover, the provision may have even adverse effects, as it may prevent some organizations from obtaining seats even if they obtained a number of votes that would have been sufficient for getting represented if they had been treated alike to the political parties. This is due to the logic behind the special provision, which advantages a single minority organization, often to the expense of the others. The net gain of seats due to the regulation is so small that one can conclude that there is no point for retaining the regulation in its present shape. The minorities have realized this too, and they initiated a bill in order to replace the current system with something very similar to the regulations in force at the level of the Chamber of Deputies. The paper briefly assesses this proposal too, however, the conclusions are not very optimistic in this regard either.