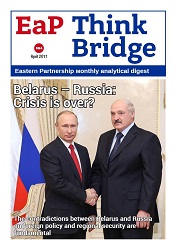 Author(s): Richard Giragosian, Vugar Bayramov, Arseni Sivitski, Lasha Tughushi, Mihail Popsoi, Sergiy Gerasymchuk, Yuri Tsarik
Subject(s): Regional Geography, International relations/trade, Security and defense, Present Times (2010 - today), Peace and Conflict Studies
Published by: PIC Promotion of the Intercultural Cooperation
Summary/Abstract: The Russian factor remains critical both for domestic and foreign policies of the Eastern partnership countries. Even states that do not face Moscow’s direct threat are forced to consider Kremlin’s opinion when taking important decisions. This dependence turned acute in March. Relations with the Russian Federation dominates traditional monthly reviews. Georgia, according to Tbilisi, faces another step in the attempt of the annex of the self-declared South Ossetia, that is a referendum about the change of this territory name. Belarus – Russia confrontation increased even more, with mutual accusations on the issue of oil and gas supplies. Ukraine decided to impose sanctions on five Russian banks, tightening its policy in response to Kremlin’s actions in Donbas. Armenia, in an attempt to shrug of its over-dependance on Russia, is making more efforts to find both the balance and the new Western partners. Whereas the president of Moldova, on the contrary, makes his efforts to strengthen Moldovan – Russian relations with his second visit to Moscow since the beginning of the year. The contradictions between Minsk and Moscow have become especially visible since the beginning of the Ukrainian crisis, however, they appeared much earlier and have always been fundamental. After the presidents of Russia and Belarus meeting in St. Petersburg both sides unexpectedly stated they have come to terms in all disputable points. However, can they really put their contradictions behind? Belarusian colleagues prepared a de¬tailed analysis of the dynamics and prospects of the conflict development. //// CONTENT: ARMENIA: FACING THE IDES OF MARCH // AZERBAIJAN: FIGHT FOR BANKING SECTOR // BELARUS: (NO) FREEDOM DAY // GEORGIA: DANCING WITH WOLVES TO TUNE OF VISA FREE REGIME // MOLDOVA: MEDDLING THROUGH THE EAST – WEST DIVIDE // UKRAINE: BLOCKADE, SANCTIONS AND POLITICAL INSTABILITY // ANALYTICA: BELARUS – RUSSIA: CRISIS IS OVER?