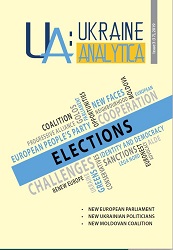 Summary/Abstract: The article focuses on outcomes of the elections in the Republic of Moldova that took place on 24 February 2019, coalition negotiations between the Democratic Party of Moldova (DPM), Party of Socialists of the Republic of Moldova (PSRM), and ACUM bloc (which includes the Party of Action and Solidarity led by Maia Sandu and the Dignity and Truth Party of Andrei Nastase), final composition of the government and its impact on the Moldovan political agenda. The author argues that the key outcome of the elections is sort of a ‘hybrid coalition’ between explicitly pro-Western and explicitly pro-Russian forces that eventually may lead Moldova to a geopolitical deadlock.