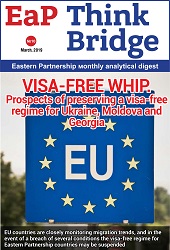 Author(s): Richard Giragosian, Lasha Tughushi, Sergiy Gerasymchuk, Kateryna Kulchytksa, Yuri Tsarik
Subject(s): Regional Geography, Civil Society, Governance, International relations/trade, Security and defense, Present Times (2010 - today)
Published by: PIC Promotion of the Intercultural Cooperation
Keywords: Political prisoners in Azerbaijan; protests against government in Armenia; Belarus legislation on information; Georgia judicial reform; Crimean tatars under Russian rule;
Summary/Abstract: In the Ukrainian presidential race the possible abolition of the visa-free regime with the EU in case of the victory of a “wrong” candidate became a hot topic. The dividing line was no longer on the voters’ preferences of Russia or the West, as none of the openly pro-Russian candidates had any real chances of winning. However, visa-free issue is still used in the campaigns after the first round, despite the fact that both leaders declare a course towards the West. Under what conditions can a visa free regime be, in fact, suspended not only for Ukraine, but also for the other Eastern Partnership countries? And who really walks on the edge - Kyiv, Tbilisi or Chisinau? Ekaterina Kulchitskaya analyzes. In the meantime, Belarus is only preparing for elections. The president is carrying out personnel changes and strengthening the rears in the regions. Another important step in this process was the adoption of the Information Security Concept. Neither the rights of citizens nor union obligations to Russia, but the supremacy of the state in the information space is placed first in the document. What is so unusual about this Concept and why it is needed at all, Yuri Tsarik tells. Moldova already shares out main posts after the elections. Although only three parties passed to the new parliament, they haven’t been able to reach an agreement yet. The same is the situation with the judicial reform in Georgian parliament. Since the negotiations were at an impasse, the opposition appealed to the Venice Commission for help. And the Armenian not numerous but vocal opposition strives to reduce the powers of the prime minister with no luck so far. Meanwhile, Azerbaijan saw an unprecedented amnesty, when 51 political prisoners were released. Is this a sign of the regime liberalization or the result of pressure? //// CONTENT: Mistakes & missteps: Armenian government begins to falter // Azerbaijan: Political prisoners released in mass pardon // Belarus: In the grip of the negative and seeking the positive // Georgia: the Venice Commission is to get involved in the judicial reform // Moldova: Where the three fight, the fourth wins // Ukraine elects, EU values progress, Russia persecutes crimean tatars // Analytica: The concept of Belarus information security and its long-term consequences // Visa-free whip. Prospects of preserving a visa-free regime for Ukraine, Moldova and Georgia