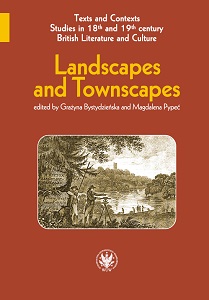 Author(s): Przemysław Uściński
Subject(s): Theoretical Linguistics, Applied Linguistics, Studies of Literature, 19th Century, Philology, British Literature
Published by: Wydawnictwa Uniwersytetu Warszawskiego
Keywords: countryside; pastoral poetry; enclosures; picturesque; nostalgia; ecocriticism
Summary/Abstract: In "The Song of the Earth", an ecocritical reading of numerous English writers of the countryside (Gilpin, Wordsworth, Austen and Hardy, among others), Jonathan Bate draws attention to the ambiguity of nostalgia, a feeling the implications of which entail both the idealization of the past and, Bates argues, the potentially valuable critique of the present. While focusing on Oliver Goldsmith’s influential poem “The Deserted Village” (1770) and its later resonance and reception, I refer also to such writers and thinkers as Crabbe and Cobbett, for whom the poetical meditation on the countryside compels an often wide-ranging political reflection on change and progress, on (human) nature as well as on politics and economy. I consider the ambivalence of nostalgia together with the notion of the picturesque as discussed by Gilpin. The fashionable “aesthetization” of the countryside in picturesque representations risks obliterating its historical transformations as discussed by Goldsmith. If nostalgic longing risks cancelling history by returning to the idealized past, the picturesque risks, in turn, erasing human labour by “naturalizing” itself as a mere framing of nature, or a mere adjustment of our perception of what is presumed to be already naturally present, but which may, in fact, be constructed through our nostalgic longing for such presence.