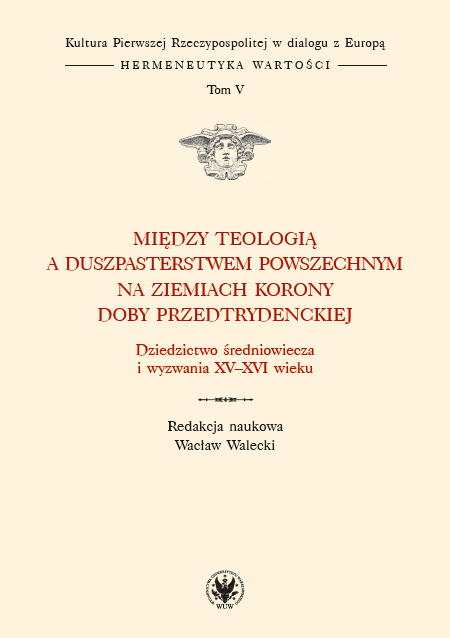 Author(s): Mirosław Piotr Kruk
Subject(s): Cultural history, Middle Ages, 6th to 12th Centuries, 13th to 14th Centuries, 15th Century, 16th Century, 17th Century, 18th Century
Published by: Wydawnictwa Uniwersytetu Warszawskiego
Keywords: pre-Tridentine culture values; pre-Tridentine spirituality; pre-Tridentine piety; religious communities; humanism; renaissance
Summary/Abstract: An attempt to reconstruct the sources and describe the spirituality profile of selected Polish religious communities in the European context. It consists of dissertations presenting the basic determinants of the value of Polish pre-Tridentine culture in terms of spirituality and piety. In subsequent articles, the authors describe selected values (religious, political, ethical, aesthetic), referring to new, unique sources, not yet analyzed at all or considered from a research perspective other than that adopted by the authors. Eucharistia, Exegesis, Pietas, Devotio, Penitentia, Indulgentia, Paideia, Paupertas, Memoria - these are selected concepts on the basis of which the authors try to show the central idea of the entire project on the culture of the First Republic in dialogue with Europe and hermeneutics of values: scope, directions and methods the mutual flow of reflection in Polish and European culture - here in relation to the pre-Tridentine era and in the face of the emerging challenges of humanism during the Renaissance. The 12-volume series of monographs Kultura First Rzeczpospolitej in dialogue with Europe. The Hermeneutics of Values ”presents the cultural heritage of the 15th and 18th centuries as an integral but original part of European culture. The research goal is to identify the ways and forms of the mutual transmission of aesthetic, political and religious values and to present in a broad, multilateral comparative context the axiological structure of the Polish culture of old times. Cultural texts are examined from an internal perspective as records of acts aimed at understanding values, and from an external perspective as statements that join European literary-aesthetic, political and religious discussions. In an intense dialogue, the culture of the Republic of Poland shows not only a receptivity to new ideas, but also creativity and dynamism in operating in Europe.