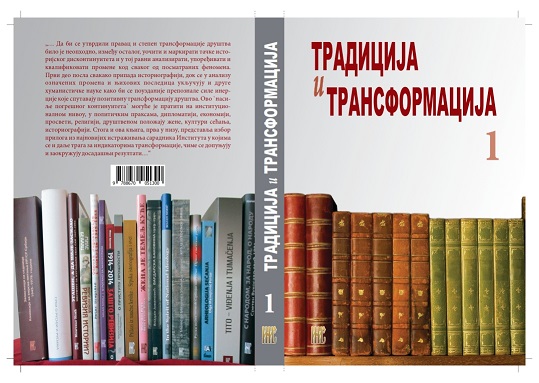 Author(s): Dejan Zec
Subject(s): Governance, Political history, Social history, Politics and society, WW II and following years (1940 - 1949), Sports Studies, Sociology of Politics
Published by: Institut za noviju istoriju Srbije
Keywords: Sport; physical culture; socialism; reorganization; building;
Summary/Abstract: Throughout its existence, sports in Serbia and Yugoslavia developed, to a large degree, under the influence of politics and various political ideologies. In the Kingdom of Serbia, MPs and government ministers had the power to both help and hinder sporting clubs, and in the return they gained popularity and prestige that went hand in hand with the executive posts in sporting clubs and with the presence in the executive boxes of the stadium terraces. In the Kingdom of Serbs, Croats and Slovenes/Yugoslavia, sport, among other domains of public interest, represented a ground for clashes between the state officials, which used sporting clubs and organizations as tools for promoting government policies and, starting in 1929, as instrument for spreading the ideology of integral Yugoslavism, and the opposition, both democratic and nationalistic, which also held great influence in sports, especially in the Croatian parts of the country. The socialist period of Yugoslav history was not much different. Totalitarian ideologies paid great attention to sports and physical culture, not just as an ideal medium for self-promotion and advertising the superiority of one’s own political and social model, but also as generally important segments of social and cultural life of one nation, ideal for implementing various models of social engineering. Yugoslav communists paid much attention to the issues of sport and physical culture from the earliest days of their action, continuing the traditions of early socialists, who saw the connection between sports and physical exercise and the general state of nation’s health, especially the health condition of urban working population. Members and officials of the League of Communist Youth of Yugoslavia participated in the work of Moscow-based Red Sport International (or Sportintern) and other international communist sporting associations and at the same time managed numerous sporting clubs throughout the country. There were hundreds of sporting clubs in Yugoslavia controlled by the communists with thousands of members and competitors. During the Second World War, the communist- controlled National Liberation Army organized numerous sporting events, such as the partisan „Olympics“ in Foča in 1942, sporting games of the youth in Drvar in 1944, football matches in the liberated island of Vis in 1944 or the foundation of the „Partizan“ sports society in Topusko in 1944. Immediately after the liberation of Serbia in 1944, the new public authorities were being established. Due to the need to arrange the pressing issues as soon as possible, sporting life in Serbia was for a while in a sort of a vacuum. Technically speaking, sports and physical culture were at the beginning controlled by the Ministry of Education, but practically, in 1944 was controlled by no one. In 1945 the direction of new sports politics was becoming more obvious – the initiative was left to youth and syndicalist organizations, as well as the army, and they took upon themselves the obligation to reckon with bourgeois tendencies in sports and to set completely new foundations to Serbian sport. Main characteristics of the earliest period of post-war Serbian sporting history were suppression of the old civic sporting clubs and associations and confiscation of their property, creating new clubs, which represented new authorities and social and political organizations, as well as organization of supreme controlling bodies, which were to keep their eyes on the entire sporting life of the nation. The model on which the new clubs were organized can best be seen on the examples of the two Belgrade sporting associations founded in 1945 – „Crvena zvezda“, a club run by Serbian United Antifascist Youth League, and „Partizan“, club run by the Yugoslav army. It is important to mention that control over the sporting clubs was to certain extent decentralized – in the beginning, the main authorities in sports were Physical Culture Councils, which were organized at the level of federal units, which meant that supreme governing body of Serbian sport was the Physical Culture Council of Serbia, while the Yugoslav Physical Culture Council was just a federation of basically autonomous organizations. This meant that different Yugoslav republics actually led quite different sporting policies. The policies especially differed in Serbia and Croatia. Yugoslav sport in the period of socialism was in the constant process of change. With the partial change in the political and ideological course of the state due to the confrontation with the Cominform, the grip on sport was somewhat loosened. The relations in Yugoslav sport also changed when the politics of self-governing was introduced. However, the radical transformation of Serbian sport from the earliest period of communist rule shaped the sport in the second half of the 20th century and some of the decisions then made still linger today.