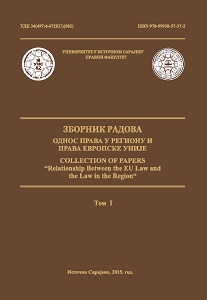 Harmonizacija prava u regionu sa pravom EU u kontekstu funkcije, vrijednosti i efikasnosti pravne norme
The Harmonization of Laws in the Region with the EU Laws in the Context of Function, Value and Efficiency of the Legal Norms

Author(s): Mirjana Nadaždin-Defterdarević
Subject(s): Law, Constitution, Jurisprudence, EU-Legislation
Published by: Правни факултет Универзитета у Источном Сарајеву
Keywords: Europeanization; Harmonization; Download; Acceptance; Objective; Function; Value and efficiency of legal norms;
Summary/Abstract: The process of joining the EU membership for the Western Balkan countries implies the Europeanization process that strongly affects all spheres of their lives. The influence of this process is displayed in different ways and is accompanied by various effects of transformation. However, the normative aspect of this process is in the background of all these changes, therefore they cannot be analyzed independently of the way in which formal and informal structures, policies and procedures are internalized at the national level.Harmonization of national law with EU law, which implies adjustment,acceptance and implementation of the acquis of the EU in the national legislation of the Western Balkans, in the process of accession to the EU revealed a number of problems. The process of harmonization is usually reduced to formally meeting the administrative priorities, ignoring its true content. In this way, adapting European legislation to local laws and practices is some what parallel to the way that the European acquis is biased towards the experience of Western European member states, often neglecting and ignoring the characteristics of the new context in which it has yet to be applied.Harmonization of national laws in the region with the EU laws is primarily manifested as support to the objectives, functions and values of the adopted European standard. Acceptance is expressed as weaker will, manifested through lack of ownership of responsibilities or neglect thereof in applying the adopted standard. Acceptance in this case can be justified by the fact that the harmonized standard is not a reflection of the context for which it is intended, but merely indicates the direction in which the context should develop. The mismatch between the internalized content and the real social relationship, i.e. the harmonized standard, is reflected in all the aspects of harmonization. The objective of harmonized standards which transforms during its realization, adapting to social reality, its values accepted, but without an assurance of them being consistently applied, its effectiveness, which is conditioned by sanctions, and even its uncertainty, justifies the question of how legally binding the harmonized standards.No matter what all these aspects of action of harmonized legal norms show a significant deviation from the optimum, the validity of the harmonized standards is not put into question by this. The most important assumption of the current mandatory harmonization of legal norms is that it will be applied.

Ustavna norma kao bitak i trebanje Constitutional Norms - What They Are and What They Have to Be 0 Sadržaj i značaj vrijednosno-teleološkog aspekta prava The Content and Significance of the Value-Teleological Aspect of the Law 0 Pravna država i vladavina prava u kontekstu tranzicije pravne vrijednosti u tranzicijskoj stvarnosti Legal State and the Rule of Law in the Context of Transition -Legal Values in the Reality of Transition 0 Odnos države i društva u političkoj zajednici The relationship between state and society in a political association 2012 AFIRMACIJA LJUDSKIH PRAVA KAO POLAZIŠTE ZA REDEFINISANJE POLITIČKOG I DRŽAVNOPRAVNOG KONCEPTA BOSNE I HERCEGOVINE AFFIRMATION OF HUMAN RIGHTS AS THE STARTING POINT TO REDEFINE POLITICAL AND LEGAL CONCEPT OF BOSNIA AND HERZEGOVINA 2016
2023 © CEEOL. ALL Rights Reserved. Privacy Policy | Terms & Conditions of use
ICB - InterConsult Bulgaria core ver.2.0.1219