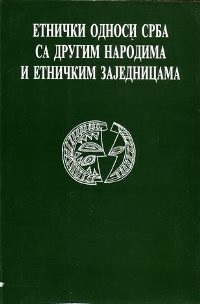 Author(s): Dušan Drljača
Subject(s): Inter-Ethnic Relations, Politics of History/Memory, Peace and Conflict Studies
Published by: Етнографски институт САНУ
Summary/Abstract: In contemporary conditions of ethnic and national revival, the Serbs are referred to review their relations with other people. We should accede to these tasks reliably and truthfully, bearing in mind scientific ethos and maturity of the people we belong to. Serbian great migrations should make us be always aware of possibilities of making big synthesis: between our own culture and civilisations of the countries we live in. All the nations of the world are unequally overtaken by processes of speeding up uniqueness and searching, i.e. globalisation and mondialisation of the culture. Different nations accepted these processes in different ways. For example national minorities and some parts of the same nation did not react equally on the very same impetus. If we accept the fact that the main characteristics of the ethnic entity is direction towards past, and that that past is not only the concern of the historical science, but everything realised by collective memory, we shall for example reveal ethnic tolerance in the Middle aged Serbia, live dialogue with other nations. We shall also reveal irrational "Serbophobia" in Austria at the beginning of the 19th century. We cannot deny the fact that the main difficulties in the process of national integrity of the Serbs really happened. They are happening, too, because of powerful Serbian national identity developed under the influence of different cultural and religious surroundings. Serbian people, with highly developed national consciousness, particularly their edged part, did not - according to Western opinions - expose certain amount of exact "co-operation". Imposing parting with epic, "mythological" past is in severe conflict with collective memory of Serbian people, primarily in the Western parts of the ethnic area. Considering ethnic / national relations of the Serbs and other people, we shall not neglect different historical and social context in which these processes developed and are developing. It is shown how possible it is without any time distance to change character of those relations in recent couple of years. Ethnic conflict in Bosnia and Hercegovina, as an aspect of social conflict, has its social and cultural foundation. Confessional background (ethnic conflicts, concerning religious and cultural cohesion, are often religious wars) is very similar to conflicts in border area and it is powerfully coloured with different "historical memory". Two sides ethnic conflict inside Bosnia is followed by inter ethnic conflicts (Muslim: Muslims, Serbs: Serbs). Bosnian conflict must unavoidably be considered within Yugoslavia in general, in context of continuous clashes and new ethnic sharing in Europe and elsewhere. The last war in Bosnia, as it is known, ended by signing defrauded peace agreement. As it always happens, in any war, peace talks were preceded by the defeat of the sides in war, claiming its ethnic space and disarming. The other side also feels defeated, because initial and rising ambitions have not been fulfilled. Some 60% of the today's Union of Bosnia and Hercegovina are pronounced refugees. They all agree that there was "foreign hand" in legal state in former Yugoslav republic. Peace agreement was signed, but real peace, as it is shown, is still far away. Own collective memory is formed and it is developing in every entity. And it is known that each nation in Bosnia and Hercegovina had, from different periods of time, examples of "own" historical memory concerning others, mostly with negative connotation. Only were someone else's crimes remembered and retold. In the period of "opening" at the end of the eighties, patriotism was shown on different sides. Soon after, it was transformed into a sort of emotive nationalism. Our researchers added the adjective "resantimanski" to this kind of Serbian nationalism. It was not the same type of nationalism, as the others in our area. The worst of all is the fact that national matter was placed in former context, connected with the wars for territory (moving of borders) and tending towards ethnic homogenisation (moving of people). Theoretically speaking, secessionism could only be the consequence of regardless manipulation of masses. The occurrences in Yugoslavia and Bosnia had been smouldering for centuries. Although, ethnic clashes were not the product of inherent intolerance, there was much "silence fulfilled with contents" in our case. Model of secessionism is almost the very same in highly developed countries of the unique Europe and it has many elements. In separate tendencies, majority is sometimes activated, and sometimes only one or two elements are put into the first plan. Mostly rich North refuses to invest in development of the poor South, but there are variations (Cypress, Azunija). There are also no investments in the army proportionally to income. Not only people do abandon the mutual state, but also small ethnic communities taken by this. In this way "atomisation" spreads over ethnic groups. In the end some post conflict difficulties in functioning new state organisms in Bosnia are shown. There are examples of Muslim - Croatian misunderstanding in mutual federal state, and deliberate avoiding of mentioning Serbs, as if they did not live there.