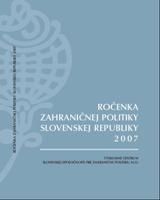 Author(s): Jaroslav Chlebo
Subject(s): Politics, International relations/trade, Law on Economics, EU-Accession / EU-DEvelopment, EU-Legislation
Published by: Research Center of the Slovak Foreign Policy Association (RC SFPA)
Keywords: Slovakia; 2007; foreign policy; economy; diplomacy; trade; legislation; EU;
Summary/Abstract: One of changes the recent years have brought to the planning and implementation of the SR’s foreign policy is its strong economization. This is linked not only to a permanent pressure on increasing efficiency of spending on a whole scale of activities in its execution but, in a broader sense, to the place, which the economy and its needs should occupy in the activities of constitutional actors, the government’s economic ministries, and the SR’s diplomatic missions abroad. Simultaneously, it is not just a matter of export support or the preparation of the legal basis for cooperation in various areas of the economy, which is the most commonly identified activity in this regard. Because we live in the era of globalization that is typified, inter alia, by a complex interconnection of all processes taking place in the economy, the needs and interests of the SR’s economy abroad are determined primarily by its basic qualities and secondarily by the program priorities of the governing administration. In this regard, the insufficient size of the Slovak market, the above-standard openness of the economy, and its dependence on the export performance are worth mentioning. However, we also need to react to the gap between the sector of the economy represented by foreign car producers (lately LCD-screen producers) and the remainder – the one-time production base of the Slovak economy – with clearly drawn capacity and assortment limits, on the overall weak segment of small and medium enterprises, on the sensibly undersized capital of Slovak businesses, on the only rare achievement of a high rate of the added value and the like. In addition, we need to mention the need to recognize the real capacity of SR’s economy, alternatively its individual businesses, the processes undergoing in the partner countries’ economies, but also in the global economy. The very simplified list of areas where a more significant presence of the economic diplomacy is needed can be expanded to include the pursuit of foreign investments, the real state of which can be best shown by a comparison with the results achieved by all the surrounding countries, or the need for a thorough knowledge of our European Union partners’ positions towards the EU’s economic policies and a possible creation of special purpose partnerships for building our positions on them. Nevertheless, new themes come into play, too, e.g. energy security or global climate change, as themes considerably economically determined, but equally economically determining. The activities of the SR’s political representation and foreign service need to be adapted to all that and, in particular, to the elimination of the current shortcomings. The substantive bulk of the economic dimension of diplomacy is formed by all this and much more regardless of the possibly varying approaches to its terminological outlining.