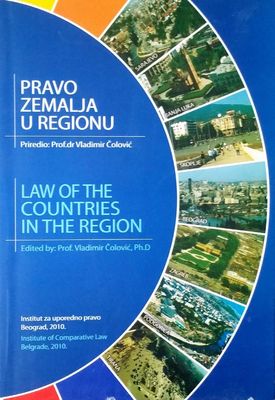 O izmeni makedonskog ustava od 7. decembra 2005.
On the Changes to the Macedonian Constitution of 7 December 2005

Author(s): Branko Pavlica
Subject(s): Constitutional Law, EU-Legislation
Published by: Institut za uporedno pravo
Keywords: Republic of Macedonia; Constitution; constitutional changes; depoliticisation of judiciary; fight against corruption
Summary/Abstract: On 7 December 2005, the Assembly of the Republic of Macedonia adopted the fifth amendment to the Constitution since it had been passed on 17 November 1991. The amendments XX-XXX (eleven amendments) primarily refer to judiciary. Actually, as requested by Brussels the objective of the adopted amendments was to achieve depoliticisation of judiciary, what was a prerequisite for the future accession of the Republic of Macedonia to the European Union. As early as on 16 December 2005 Macedonia gained the status of EU candidate country although the date when the negotiations would commence “remained open”. In essence, the important new items that are aimed at depoliticising judiciary and facilitating fight against corruption imply the abolishment of immunity to numerous officials. Therefore, unlimited immunity in Macedonia is enjoyed only by the President of the State (in accordance with the Article 83), Prime Minister (Article 89, paragraph 3), members of the parliament (Article 64), judges (Article 100, paragraph 1) and judges of the Constitutional Court (Article 111, paragraph 2). By all this, it should be pointed out that the activities of the Constitutional Court are regulated by the special chapter IV of the Constitution (Articles 108-114), which are not included in the regulations on courts. Therefore, it enjoys a special status. All others that have been privileged so far – ministers, members of the Judicial Council and state prosecutors – do not enjoy immunity any longer. What is essentially new is that judicial immunity has not only been maintained but has even been strengthened by the introduction of indemnity – which is not time limited for their statements in theprocedure. Also, there are new things that concern the Judicial Council of the Republic of Macedonia, being “the personal management judicial body”. In the same way, “the Council of State prosecutors” has been established, and it is the personal management body for state prosecutors that is responsible to the Judicial Council. Therefore, the last constitutional amendments (XX-XXX) adopted on 7 December 2005 (Služben Vesnik 107/2005 – Official Gazette 107/2005) treat judiciary amending the Articles No. 13, 15, 84, 89, 91, 100, 104, 105, 106 and 108 of the Constitution of the Republic of Macedonia.