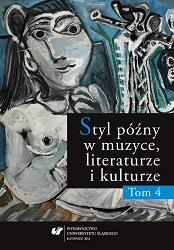 Author(s): Ewa Borkowska
Subject(s): Literary Texts, Music, Studies of Literature
Published by: Wydawnictwo Uniwersytetu Śląskiego
Summary/Abstract: The late style is notoriously difficult to define, since for some creators, it correlates with the final period of their artistic activity, while for others, it begins much earlier. However, in both cases, it comes to signify artistic maturity and the mastering of a certain “grammar of creation,” discussed by George Steiner in his book. This philosopher and literary critic, who was also an expert on music, made numerous attempts at discussing “the dusk of the artistic endeavour” before arriving at the conclusion that what is crucial is the “cult of thebeginning,” the first notes of “the grammar of creation,” which function as an overture,marking the beginning of the work. It appears, then, that it is precisely in the “incipit” thatthe promise of the conclusion is located. The mature age can also manifest in the author’smastery of their artistic craft. The article includes numerous examples of fascinationwith the late style in poetry (William Shakespeare, John Donne, William Blake, ReinerMaria Rilke, James Joyce, Seamus Heaney, Gerard Manley Hopkins), as well as music andart (Roger Scruton, George Steiner, James Joyce). Zbigniew Herbert, Alfred Tennyson orWilliam Butler Yeats.