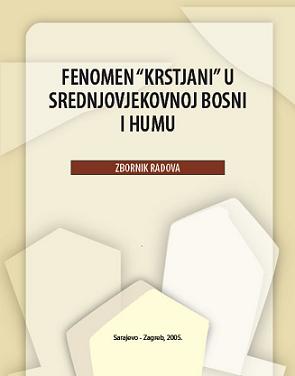 Author(s): Lujo Margetić
Subject(s): History, Political history, Theology and Religion, 13th to 14th Centuries
Published by: Institut za istoriju
Summary/Abstract: Abjuration of Bosnian krstjani in 1203 is a very complex document of the contemporary Bosnian clerical history with which they pledge their full compliance with the Roman Church and its teaching. Since this work seeks to analyze the meaning and the content of specific dispositions of the Abjuration, especially its invocation, the author closely examined all the other references that connect Pope Innocent III with Bosnian krstjani from the period between 1199 and 1203 - up to the time the Pope’s direct interfering with Bosnian religious affairs ceased. The analysis of the 1203 abjuration proves that the papal legate, John de Casamaris, was exceptionally considerate to Bosnian krstjani and that, in certain matters, he demonstrated utmost flexibility and willingness to compromise which, in turn, resulted in their complete acceptance of the authority of the Roman Church. The mentioned flexibility especially referred to the invocation that mentions only God-Father instead of both God-Son and the Holy Spirit – as opposed to other contemporary recognition of orthodox teachings (such as Valdes, Durand of Huesca and Bernard Prim) where the greatest emphasis is on the same divine character of all of the three members of the Holy Trinity. This invocation draws the author to conclude that some remnants of pseudo-Arian beliefs survived because the central Roman Catholic organization soon lost its influence in Bosnia. That is, among other things, the reason why the sign of flexibility in the Abjuration is the fact that the Roman Church is not mentioned as an apostolic Church. This is why the Abjuration greatly differs from the aforementioned western European orthodoxy acceptance principles. Other facts from the Abjuration include that the Bosnian krstjani were not organized in monastic communities and that Šanjek rightfully calls them “pseudo-monks”. Furthermore, the author compared the teachings of Paulicians, Iconoclasts, Bogomils and contemporary western European heterodoxies with corresponding teachings of Bosnian krstjani and came to conclude that all these heterodoxies have several significant teaching elements in common, and the belief that God is the initial creator of all things but temporarily left Satan in charge of the visible world. Digressing, the author analized the position of Bosnia during the rule of ban Borić (second half of the 12th century). According to the author, Bosnia was actually, independent at that time: the Ban acknowledged the not very pronounced senior rule of the Croatian-Hungarian king. Furthermore, in his other excursion, with a special emphasis on Bosnia, the author analized very complex relations between Pope Gregory IX and the Croatian-Hungarian king Bela IV, Coloman, the duke of “the entire Slavonia” and Bosnian ban Ninoslav in the first half of the 13th century and concluded that the king was very reserved in his political contacts with Coloman since he was an avid supporter of Bela IV as a chief commissioner for united and strong Hungary.