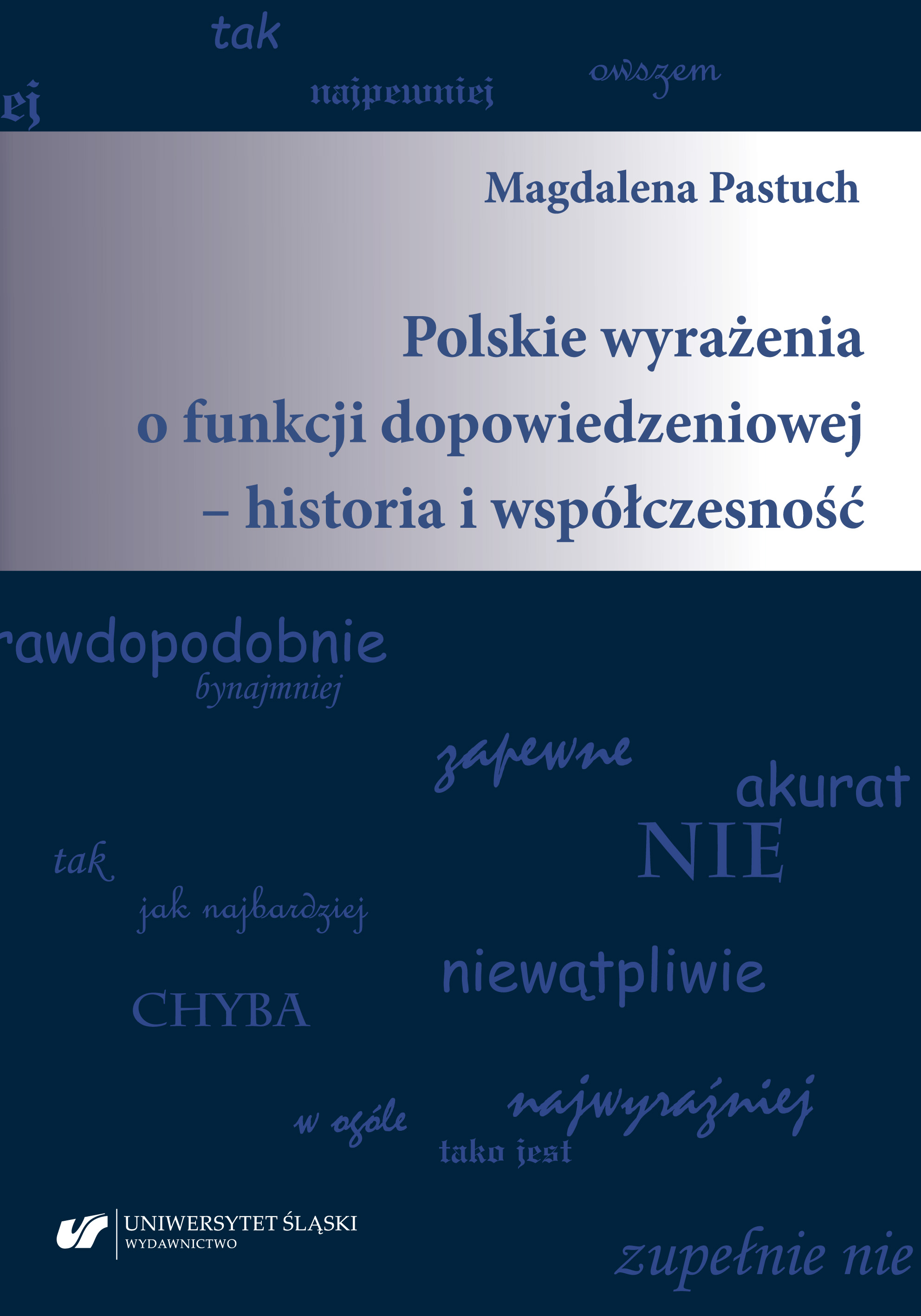 Author(s): Magdalena Pastuch
Subject(s): Language studies, Language and Literature Studies, Western Slavic Languages
Published by: Wydawnictwo Uniwersytetu Śląskiego
Keywords: linguistics; history of Polish language; metatextual expressions; polar answers
Summary/Abstract: The monograph is devoted to the topic of language expressions which function in Polish as self-standing answers to decision questions. In terms of research material, the work does not restrict it to a single selected period, but rather obtains it from various epochs, since the paramount purpose of the presented research is to describe the dynamics of language development, and therefore assigning particular language facts to corresponding historical periods is here of a lesser significance. What is the most important here is searching for certain patterns along with historical justifications facilitating a functional shift in uttering of a given expression (e.g. naturalnie (adverb) > naturalnie (particle) > naturalnie (self-standing answer to a decision question)). The purpose of the presented investigations is eliciting expressions which appear in the function of self-standing answers to decision questions, defining their relation with homonymous forms occurring in other functions, and identifying the historical sources of their contemporary semantic values. Moreover, the attempts are made to indicate mechanisms of creating new expressions with a polar answer function.The work’s structure is entirely derivative of the semantic criterion, therefore, the language units/expressions which are subsequently discussed include: units/expressions which answer decision questions, express disagreement or lack of consent, or negate the content expressed by preceding decision question (Chapter III); then there are discussed units/expressions which stand as autonomous expressions of agreement/consent or an affirmative answer to a decision question (Chapter IV). The final research material-based chapter (V) describes the units which express various degree of the interlocutor’s unsureness in relation to a question asked. The semantics of the sequences under analysis is encapsulated by the following paralocutions [phrases expressing analogous content]: ‘yes, I agree with what my interlocutor has said’ / ‘yes, I confirm what my interlocutor has said’ or ‘no, I do not agree / no, I do not confirm’; in the case of units expressing unsureness, the generalised meaning is the following: ‘the unsureness (of a judgement) in relation to the question asked by another participant of a dialogue (the previous speaker)’. The research material-based chapters have been designed according to similar pattern, so that a reader can compare both historical and lexicographic knowledge related to the topic of expressions selected for description with the conducted interpretations.I approach the development of a new function as a kind of functional derivation. The material gathered testifies to the fact that in many cases a polar answer function is created based on a particle which, in turn, is derived from a homonymous adverb (e.g. oczywiście, absolutnie). The transitions of the said kind are sometimes accompanied by mechanism visible in surface structure, that is, ellipsis and composition. The former is among others represented by być może > może, as illustrated by the following examples:Miałby pan kłopoty, prawda? Być może. Kloss nie tracił spokoju.Co, miałaś wizje religijne? – Może.While an example of composition as a mechanism resulting in expressions with a polar answer function are contemporary colloquial answers to decision questions, for instance:Czy jak się spotykasz z przyjaciółmi, to oferujesz im granie na konsoli? No raczej.Gorzałka. Chcesz? No chyba.The point of departure for the provided descriptions of answers to decision questions is always semantics, yet complemented with pragmatic information in accordance with the cumulative pragmatic theory. The foregoing assumption mainly necessitates referring to the semantic values of particles which have become a basis of a polar answer function’s development. Epistemic particles are naturally predisposed to this aim, since they comment upon epistemic acts, that is, operate within the realm of knowledge. In the case of answer to decision questions, so a answer that occurs in a dialogue, it is necessary to specify that such a commentary, which conveys the sender’s information regarding the level of sureness, in fact refers to a question from the dialogue. This very reservation bars some of the epistemic particles from becoming polar answers. Since an interrogative sentence is neither a sentence in the understanding of logic, nor is it a judgement, answers to decision questions may, therefore, originate from both the particles implying that a given state of affairs is actual (e.g. na pewno) and from the particles devoid of the mentioned feature (e.g. chyba). However, particles implying factuality of a given judgement may not be, for the reasons already stated, basis for polar answers (e.g. faktycznie). Also units which, from today’s point of view, qualify as instances of meta-textual commentary, constitute bases for their usage as polar answers (e.g. ba).