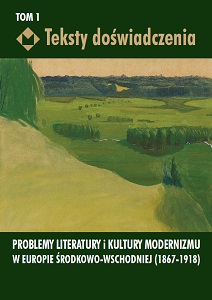 Teksty doświadczenia. Tom 1
The texts of the experience. Volume 1

Contributor(s): Ewa Paczoska (Editor), Izabela Poniatowska (Editor), Mateusz Chmurski (Editor)
Subject(s): History, Language and Literature Studies, Cultural history, Studies of Literature, Theory of Literature
Published by: Wydawnictwa Uniwersytetu Warszawskiego
Keywords: modernism; 19th-20th century literature; Central Europe; culture; problems; literary criticism
Summary/Abstract: A collection of texts on issues relevant to the construction of the map of modernisms in Central and Eastern Europe in the years 1867–1918, discussing identity transformations, shaping ideological currents in the region and the search for the concept of nationality and European community, the renewal of spirituality, redefinition of corporeality in the cultural space, and the impact of Freudism. Excellent analytical texts by researchers of this period, enriched with valuable indexes, are a rich source of knowledge for literary scholars, cultural scientists, sociologists, ethnologists, as well as literary and film critics interested in the so far poorly described subject of modernism in this region. The 3-volume publication is the result of a research project carried out under the National Program for the Development of Humanities. The authors propose to recognize the literature of Central and Eastern Europe in the years 1867–1918 as a whole, using a category important for cultural research, which today assigns special importance to the phenomenon of place. Reflecting on the literature on modernism in Central and Eastern Europe, the authors of the project want to show how the writers and critics reacted to the challenges of their time and how the dynamics of their explorations was shaped. The choice of the time frame 1867–1918 is related to this. Both dates are connected with the most important political events for modern Central and Eastern Europe. This is the time of the birth of nationalisms, but also of the emergence of utopias that cross the borders of national particularisms. The perspective proposed in the publication (and its tools) are not theoretical - the authors are less interested in defining modernism as a theoretical construct than in dealing with the living matter of local responses to the experiences and artistic impulses of modernity. Their main desire was to bring local stories together with the mainstream of modernist narrative: about change and breakup, about the chaos of life, about the search for subjectivity, about the fight against the dictates of oppressive forms of culture and language, about the construction of identity in the individual and collective dimensions.

W proteście przeciwko „letniej wierze”. Modernizm i Kościół w czeskich poszukiwaniach nowoczesnej formuły religijności
(Against the „lukewarm faith”: the correlation between the Modernism and the Church at that time when the Czech searched for modern ideas of religiosity)

Sobowtór w Pradze (filmowej)
(The double in Prague (on the screen))